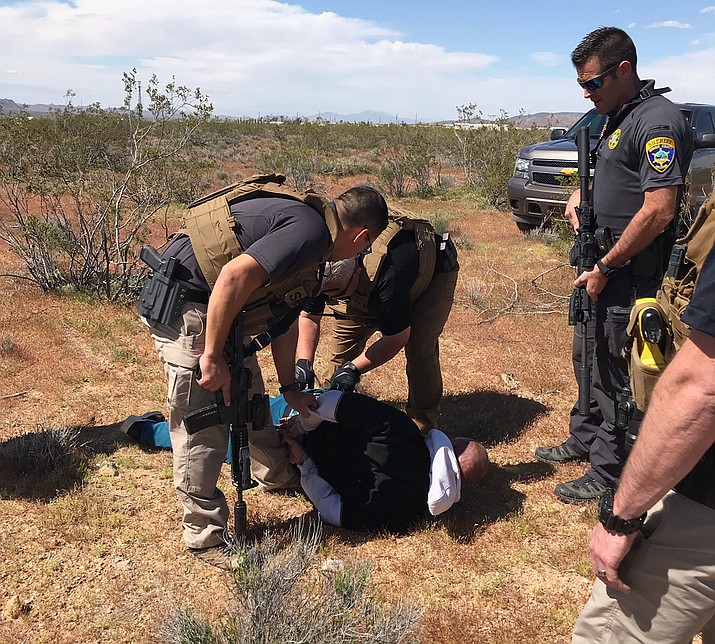 KINGMAN – Mohave County Sheriff’s detectives have caught Wendell Wayne Odom II on Thursday after dispatch received several calls from the community regarding possible sightings of a male subject walking in the area of Dolan Springs, according to MCSO officials.

At approximately 10 a.m. Thursday, law enforcement converged on the area and established a perimeter surrounding the area mentioned in the calls.

Several residences in the area were swept and cleared by detectives and Tactical Operations Unit members with no success. At approximately 2:10 p.m., a deputy called out that he observed a male subject running in the desert area of Third Street and Bullhead Road.

Multiple units responded to the area and once it was determined to be Odom, he was detained and taken into custody without further incident.

On Wednesday, deputies attempted to make contact to question Odom about a previous incident, but he slammed the door closed and hid behind a piece of furniture. Odom had been identified as a potential suspect in a burglary in Dolan Springs.

Deputies began giving verbal commands for Odom to show his hands, and he allegedly shot at deputies with a firearm. Deputies retreated to cover, and the MCSO TOU were called to the residence.

After making entry into the residence, TOU found that Odom had fled the scene. Deputies, detectives, TOU, K-9 units and sheriff’s office command staff responded to the scene and began combing the desert area surrounding the residence in an attempt to locate Odom.

The case is still under investigation and additional charges may be pending.