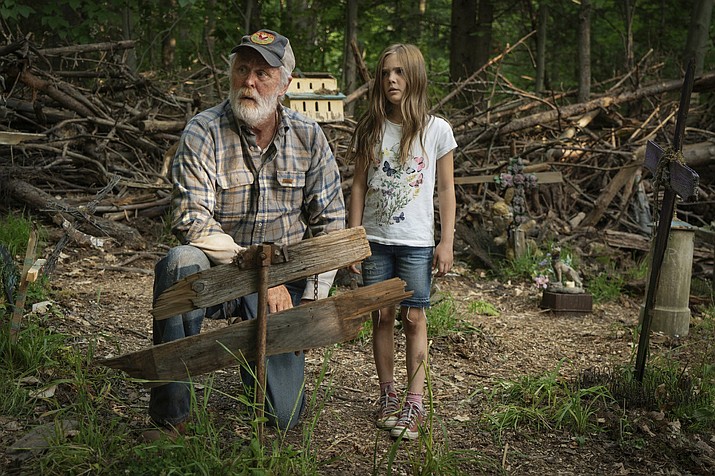 We live in a time where children are lost to accidents, mass shootings and domestic assaults. So, it is inadequate that Stephen King’s cult classic, “Pet Sematary” would be regurgitated as a blisteringly tame remake. Are my expectations too dark? King wrote the original script in 1979 after his daughter’s cat died on a road near their home. Soon after, his own son nearly died on the same road. King considered the material too dark for audiences at a time when the death of children left communities incapacitated with grief. In 2019, we are well-versed in that grief and the lengths we might all go to have a child returned.

Dr. Louis Creed moves his wife, Rachel, and their two young children, Ellie and Gage, from Boston to the small town of Ludlow, Maine. The property encompasses 50 acres but the Realtor, Zillow and Google Maps apparently didn't reveal that it came with an ancient, haunted burial ground. That pesky lack of due diligence wreaks havoc when their well-meaning neighbor, Jud, recommends that Louis bury Ellie’s deceased cat, Church, in the Sematary. When the cat returns, no one seems particularly concerned.

For King aficionados, there is nothing awe-inspiring about the remake. While there have been significant changes to the book and original film plots, they are well-paced and rational. However, it is not scary nor creepy. It is more psychological thriller with the undead events as incidental mentions. There are no actual threats that connect parents in the audience with fears they hold for their children. At most, there are two nicely-played plot twists that could lead to an impressive sequel. The revamp does, however, provide important reminders for anyone planning to bury a loved one in an ancient, haunted cemetery:

• Demon children are hard to discipline. If you think getting them to do chores is difficult, wait ‘til you’re running from them wielding a butcher knife.

• Resurrected beings from haunted burial grounds always return as zombie demons. There are zero examples to the contrary.

• If your neighbor has you crawl over a barricade of sharpened logs that looks like it was erected by Genghis Khan and hike 20 miles through swamp land accompanied by growls from prehistoric beasts, missing the neighborhood pot luck is the least of your worries.

• Communication is key to a happy relationship. Critical information like, “I saw a ghost in the basement or I resurrected our kid from the dead” are helpful for family safety.

Fortunately, the acting and cast cohesion are the saving graces for this film.

The trailers revealed that the undead child is 9-year-old Ellie rather than toddler Gage. This works beautifully for the creep factor and zombie girl power.

Jeté Laurence is a capable young actress and she portrays a complexity of emotions which is a treat in a genre with myopic roles. Amy Seimetz’s performance as Rachel is gripping as she is the only character who displays fear: Tangible, mind-numbing, piss-pant horror. You sense that her sanity is as strong as a wet noodle when Ellie walks from the shadows and approaches her for a hug.

Your heart might break for, Gage, played by newcomers, Hugo and Lucas Lavoie. If only there were Child Protective Services for kids who live with demon siblings. The twin toddlers are impressive with their expressions and portrayal of high-threat levels. John Lithgow’s Jud is reminiscent of George C. Scott in 1980s “The Changeling.” He is kind-hearted and holds too much respect for the Sematary to fear it. Horror fans will hope that he’s somehow a part of the creepy history but that detail is never revealed in this rendition.

Oddly, the character who falls flat is Jason Clarke. Usually, focused and authentic, his portrayal of Louis feels over-directed and hackneyed. There is no sense that he’s so overcome with grief that he is blind to the burial ground’s corruption.

We get the usual montage of research through old newspaper clippings that reveals the town’s sordid history of resurrected people and animals, all of which feels rushed to move the story along and get to the femme fatale child. Granted, Church is not as creepy as the cat from the 1989 film. So perhaps, he was not an accurate gauge of undead potential. Louis and Rachel’s hallucinations about guilty wrongdoings of the past are more convincing emotional turmoil than their depression over their deceased child.

Refreshingly, computer enhancements are at a minimum and the film employs old fashioned-like film techniques. There are a lot of wasted bits that would have given the 30-year-old tale a fresh take. Namely, addressing national facts of childhood demise that are scarier than fiction.

King Aficionados: 3 out of 5 Undead Miners

Scream Queens and Fiends: 3 out of 5 Undead Miners

People Who Scare Easily: 4 out of 5 Undead Cats

'Shazam!' debuts with $53.5M, handing DC Comics another win
‘Annabelle Comes Home’ stays true to horror movie rules
‘Us’ is a must see film for any horror, thriller fans
Ready for some frightening fun?
Live-action 'Dumbo' struggles to soar at box office