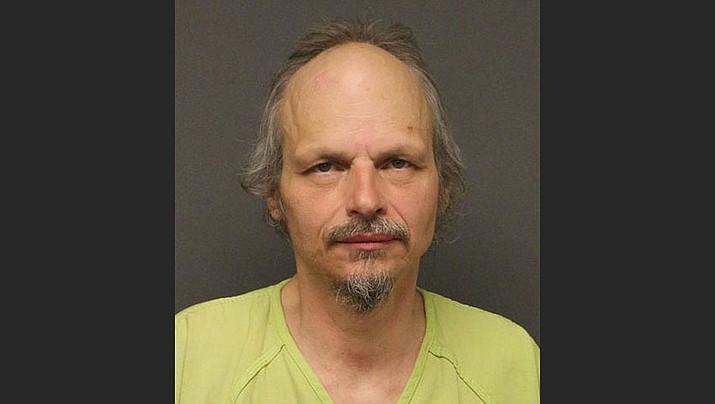 KINGMAN – While Donald Corey Dehar remained silent for the first few minutes of his hearing Wednesday, he later went on an expletive-ridden tirade that saw him threaten the judge and resulted in his removal from the courtroom of Judge Derek Carlisle.

Around Feb. 13, 2019, deputies and detectives responded to a residence in the 11000 block of West Saddleback Drive in White Hills after receiving a 911 call from one of the victims. The victim said a male subject, identified as 55-year-old Donald Cory Dehar of White Hills, shot him and another male victim with a handgun. Deputies contacted both victims upon arrival and began providing aid while waiting for emergency medical staff to arrive on scene.

One victim was eventually transported to Kingman Regional Medical Center with non-life threatening injuries, while the other was transported to a Las Vegas hospital with a more-serious injury.

Dehar’s hearing was in relation of a request from his attorney, Ron Gilleo, to withdraw from the case based on a lack of communication with the defendant.

“My client refuses to visit with me at the jail, refuses to speak with me or anyone from my office, and so obviously I cannot perform my duties,” Gilleo explained.

Dehar told the judge that he will bring on private counsel from Phoenix to handle his case, and that the attorney would be present by the time of his next hearing May 1. Judge Carlisle then began to explain the process of assigning a new attorney to the case, should Gilleo’s request be granted, as Dehar’s private counsel reportedly wouldn’t be here until May 1. That’s when the environment in the courtroom became hostile.

Dehar said he didn’t want the court to assign him an attorney. He also said he is in the “witness security protection program with the United States Marshals.” He said that he has contacted the Federal Bureau of Investigation regarding the attorney issue.

“If you want to start problems with me, sir, I’ll have you arrested,” Dehar told the judge. “And I’m not joking.”

The judge told Dehar he has two options until his Phoenix attorney files with the court, one of which is to represent himself until that time. The judge didn’t have the opportunity to give the second option.

“You can go to (expletive) Hell old man, I’ll kick your (expletive) (expletive),” Dehar said to the judge. “Shut the (expletive) up, you’re not representing me, and neither is this (expletive)-bag.”

The judge then asked Dehar to calm down.

“Shut up old man, I don’t want to hear it,” Dehar said. “You’re not representing me, I have legal counsel, and you’ll be shot dead mother (expletive).

Dehar continued by saying he would have “some guy … put a bullet in your (expletive) head.”

Judge Carlisle then said he was going to have Dehar removed from the courtroom.

“That’s fine, then remove me,” Dehar said. “Remove me old man, and I’ll meet you in the parking lot and I’ll beat the piss out of you.”

Dehar was then removed and the hearing continued. The judge denied Gilleo’s motion to withdraw, for the time being. The court also, in light of Dehar’s behavior in court, ordered a pre-Rule 11 evaluation. A Rule 11 proceeding deals with mental examinations.