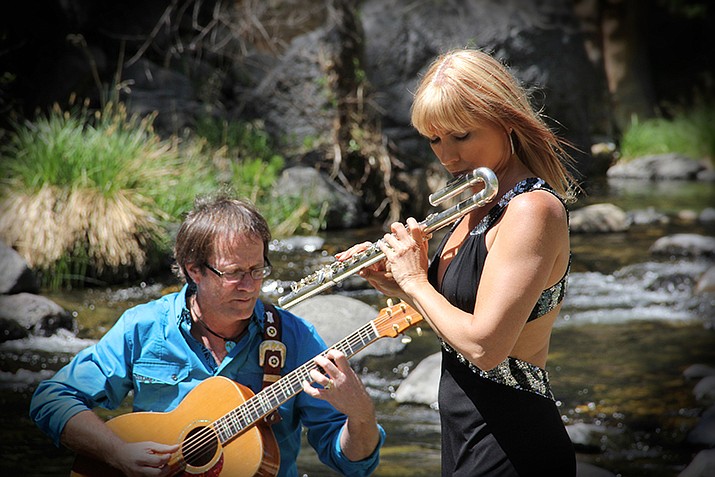 Sherry Finzer, a Phoenix-based flutist is performing with her growing collection of low flutes, which include the concert C, alto, bass and contrabass flutes, along with her classical and world background to create a deeply haunting, beautifully enchanting and uniquely memorable sound.

Darin Mahoney, the guitarist and other half of the duo is utilizing several guitars including his handmade koa wood and cedar guitar, and contributes his blend of country and bluegrass to the performance.

“We are very proud and excited to present this extremely talented and unique duo to the Kingman audience for the very first time,” said Kristina Michelson, executive director for Kingman Center for the Arts in a press release.

The duo has toured together throughout the southwest and has performed at various venues, including the Musical Instrument Museum, Desert Botanical Gardens, Green Valley Performing Arts Center, The Listening Room, Tlaquepaque in Sedona and many more.

The duos first recording, “Transformation,” received Album of the Year from One World Music in the United Kingdom. Their second, “Trialogue,” with seven-time Grammy nominee Will Clipman, won Best Acoustic Album from Zone Music Reporter, the Top 100 chart for New Age, Ambient and World music.

Their music can be heard on the C.A.R.E. Channel in hundreds of hospitals around the world, the Sirius XM Spa Channel, U.S. and international airlines, and hundreds of radio stations around the globe.

Tickets are $15 per person and can be purchased at the door or online at bealestreettheater.com.

Information provided by Kingman Center for the Arts