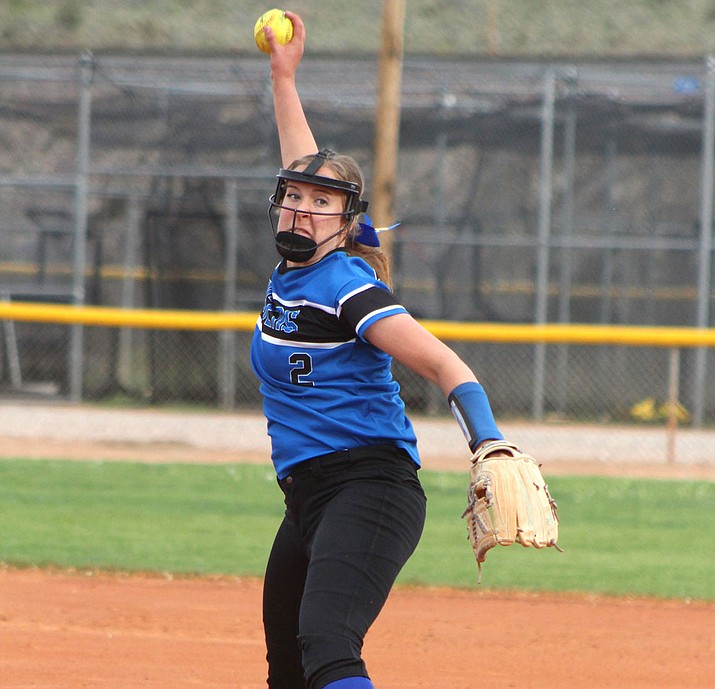 Kingman Academy freshman pitcher Abbie Bean finished with eight strikeouts in the circle and drove in a run at the plate Thursday to help lead the Lady Tigers to a 5-4 win over Chino Valley. (Photo by Beau Bearden/Daily Miner)

Kingman Academy proved that Thursday with a 5-4 comeback victory over No. 16 ranked Chino Valley (7-6, 3-4 3A West Region) at Southside Park.

“It just felt great winning that game,” Lady Tigers freshman Abbie Bean said. “We just put a lot of effort in. I feel like once we got our heads up and started cheering, we started doing well.”

The sixth inning didn’t appear to be going in favor of Academy as it quickly tallied back-to-back fly outs, but Randa Short walked and Oreauna Holland followed with a single. That's when Bean stepped up to the plate and laced a base knock to score Short.

Chino Valley committed an error to load the bases and Lady Tigers sophomore Shay Lee came through with a ground ball that the shortstop couldn’t handle – scoring two runs to give Academy its first lead of the game.

“I was surprised, but I know they can do it,” said Lady Tigers head coach Annette McCord. “They just lack a little bit of confidence. So it’s good to see that maybe this will help their confidence. They’re young, they’re coming up. They don’t realize how good they are. I was impressed.”

Even more impressive was Bean’s composure in the circle after Chino Valley jumped out to a 4-0 advantage after two innings. The freshman could have folded, but she stood tall and allowed just one hit while striking out four in the final five frames to pick up the win.

“Abbie did a great job pitching,” McCord said. “She held them – they really didn’t get anything after the first couple of innings. She’s developing well.”

Offensively, Holland led Academy with two hits, including a double, while Randa Short blasted a solo homer and Gabi Lobue also drove in a run.

At Southside Park, the Tigers had their five-game winning streak come to a halt Thursday afternoon in a 2-1 setback against No. 18 ranked Chino Valley (8-5, 2-5 3A West Region).

“Never take Chino Valley lightly – they always have a good program,” said Academy head coach Bill McCord said. “Just because they were 1-5 in the region, their games have all been close. I’m never taken them lightly. I told the kids when they got here, ‘This team is here to win.’ Right now the way the region is going, anyone can win any given game.”

Try as they might, the Tigers just couldn’t find their bats and a lot of it had to do with the opponent's starter on the mound.

“Chino Valley’s pitcher was stellar,” McCord said of Riley Roskopf. “This guy is the real deal and he’s a freshman. He’s going to go places. He had very good location and the ball moved. I don’t think one of his pitches was a curveball – they were all knuckle-type pitches.”

Academy managed just four hits off Roskopf, while striking out nine times. The Tigers scratched across their lone run on Hayven Potter’s sacrifice groundout in the bottom of the fourth to knot the game at 1-1.

Unfortunately, the tie was short-lived as the Cougars regained the lead in the top of the fifth and held on for the win.

Kaden Bean was saddled with the loss after allowing two earned runs on five hits with five strikeouts and one walk in six innings of work.

The top of the lineup propelled Lee Williams to victory as the No. 1-4 batters combined for seven hits and six RBIs.

Matt Bathauer led the way with a 2-for-4 performance, highlighted by a three-run homer in the sixth inning. Twin brother Mike Bathauer added two hits and two runs batted in, while Dylan Petersen also had two hits and an RBI.

On the mound, Matt Bathauer picked up the win as he allowed no earned runs on six hits with 10 strikeouts and five walks in six innings of work.