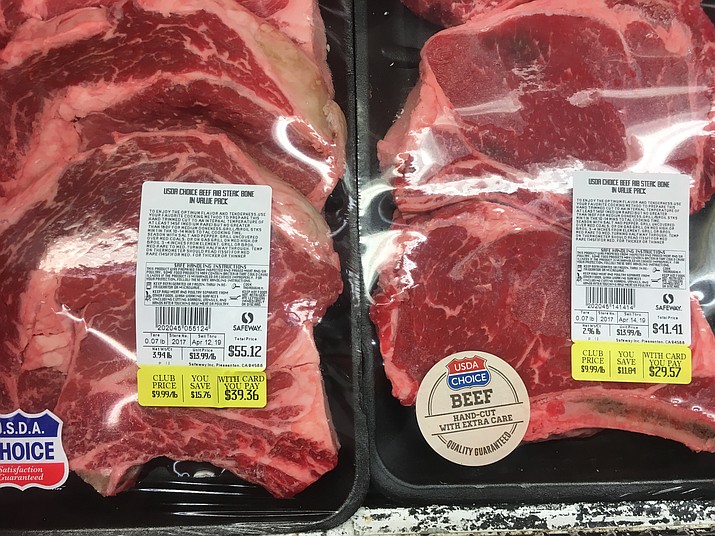 New figures from the Arizona Farm Bureau Federation put the cost of a typical “market basket” at just over $48, a $2 increase from the last quarter of 2018. (Photo by Vanessa Espinoza/Daily Miner)

PHOENIX – Rising beef prices are pushing up the cost of eating at home.

New figures from the Arizona Farm Bureau Federation put the cost of 16 typical “market basket’’ items at $48.30 for the first three months of the year. That’s up more than $2 from the last quarter of 2018.

But, seasonal fluctuations being what they are, it’s only slightly higher than the same time a year ago.

What’s keeping the shopping bill where it is are what the organization’s Julie Murphree says are unexpectedly high prices for beef.

“Our beef supplies have grown in the last two years,’’ she said. “At the same time, retail prices have remained higher than you’d think in a well-supplied food commodity market.’’

What that suggests, said Murphree, is a continued high demand for what she said is the “quality beef America produces.’’

But be prepared to pay.

That sirloin tip roast that was selling for $5.82 a pound at the end of last year? The latest survey found an average price at Arizona grocery stores just short of $7 a pound.

Even ground chuck will set you back $3.75 a pound, fully 50 cents higher than three months earlier.

But there are alternatives for meat eaters.

Most notably, the price of boneless chicken breasts has dropped a whopping $1.38 a pound, to just $2.36.

Elsewhere on the shopping list, milk is running 24 cents a gallon higher now than three months ago, with a spike in the price of shredded cheddar cheese, up from $3.45 a pound at the end of last year to $4.83 now.

But there have been offsets, including a 48-cent-a-pound drop in the cost of a five-pound bag of russet potatoes and smaller declines in the cost of orange juice, salad mix and vegetable oil.

How to save money?

The Farm Bureau survey is based on what its shoppers find the cost of the selected items at stores throughout the state.

It includes discounted specials. But what it does not include are some additional markdowns that can be available to customers who have their “affinity’’ cards that provide either online coupons or other specials.

Farm Bureau officials also say that the best way to stay within a budget is to create a list -- and stick to it. The cost of getting out the door gets higher when impulse items end up in the basket.

They also suggest not shopping on an empty stomach, with some studies saying that could increase the total purchase costs by up to 15 percent. And, along the same lines, leaving the kids at home may avoid some demand for a not-really-necessary item.