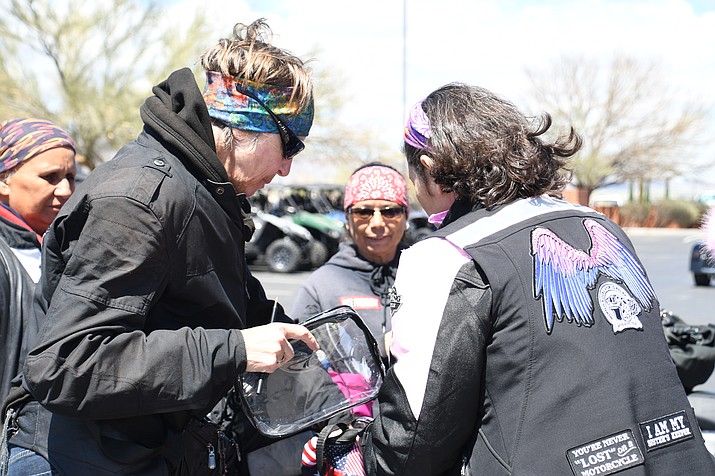 Connie Sadler, left, of the SinSitySisters Las Vegas chapter of Women in the Wind explains the rules of the baton pass to E. Kimberly of San Diego while members of the Mohave County Cactus Cuties watch. This baton pass was a national ripple relay that is running in parallel with the Women Riders World Relay. (Photo by Vanessa Espinoza/Daily Miner)

Members from the Cactus Cuties and SinSitySisters women’s motorcycle groups had just arrived at 2501 Beverly Ave. and were waiting for a rider from San Diego to pick up a baton.

Soon enough, everyone saw the pink and blue fuzzy helmet of E. Kimberly of the San Diego chapter of Women in the Wind. Connie Sadler of the SinSitySisters did the official handoff, Kimberly ate some lunch, and then she hit the road.

She traveled to and from San Diego all in one day. That is roughly 15 hours “in the saddle.”

This was part of the U.S. ripple relay of the Women Riders World Relay – a worldwide women’s riders relay that is meant to showcase the global market for women in motorsports.

“We’re grateful to Mother Road Harley for hosting this,” said Penny Townsend of the Cactus Cuties. “They have food out for us and everything.”

The main baton from WRWR – which was last seen in Macedonia on Friday – likely won’t be coming to Kingman, but it will be making the trip with the Cuties’ sister chapter the SinSitySisters from Las Vegas to Los Angeles around Oct. 6, 2019.

National motorcycle relay’s baton pass taking place in Kingman
From one little ad to a nation and world of lady motorcyclists. And there is a chapter right here in Mohave County
Golden Valley resident leading part of ride to help veterans
Photos: Hog Heaven
Local riders ready for 'Flags Over the Dam'
Event Calendar