‘Hellboy’ too long to be more than mildly entertaining 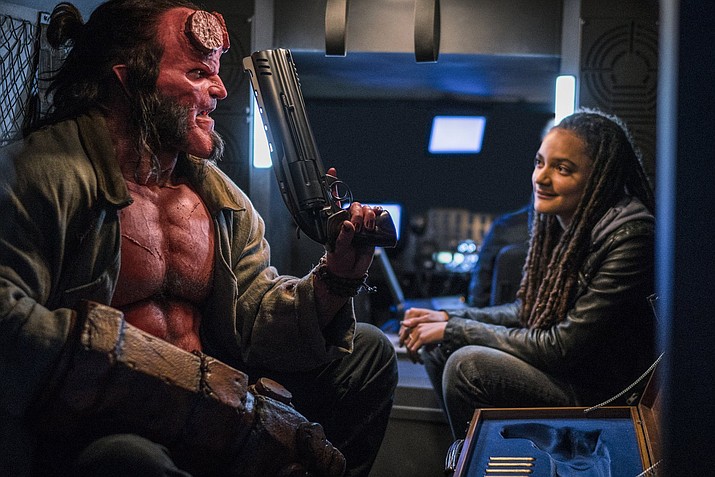 This image released by Lionsgate shows David Harbour, left, and Sasha Lane in a scene from "Hellboy." (Mark Rogers/Lionsgate)

I enjoy quirky, sarcastic and funny main characters, ie Deadpool and Guardians of the Galaxy. Hellboy (David Harbour) tries to attain that level of quirkiness much like throwing a bunch of mud at a wall to see what sticks. This is the origin story of Hellboy of DC Comics discovering his parentage in the first few minutes of the film. Although there is no explanation as to why Hellboy calls Professor Bruttenholm (Ian McShane) dad. Like most movies, the trailers don't do the movie justice. I'm not sure if seeing the prior two Hellboy movies helps explain this version because I didn't see either of them.

We are taken back in time to the days of Knights and King Arthur surrendering to a powerful witch Nimue (Milla Jovovich) and then turns the tables and slays Nimue by cutting her into pieces. Other knights are dispatched with her body parts to hide them in various parts of the country. The rest of the movie is about gathering up her body parts to put them back together and take control of the world. Hellboy's mission is to prevent that and battle ancient societies, other demons and bad characters. And this is where the movie seems to lose its momentum. Too much down time between battles and a lagging script to keep the audience interested.

There are quite a few battles and lots of carnage, blood and poorly choreographed fights. Hellboy follows the formula of good guy gets beaten badly but comes back and destroys the bad guy. It got monotonous.

Although there were very good performances by Jovovich, McShane and especially Daniel Dae Kim as Major Ben Daimio, it wasn't enough to bring the basic movie out of its regularity and into something memorable. There was enough back story to care about Kim and his secret, which was relied upon at the movie climax. Perhaps there wasn't enough Hellboy one-liners that worked. I found myself getting bored often.

The movie is rated R for the graphic violence which is a bit different from past PG-13 ratings for the various Hellboy adventures. It ran a long 2 hours and could have been condensed into about 75 minutes. Hellboy does achieve his goal of stopping Nimue, but there were so many other quests and bad guys to deal with it inevitably will lead to sequels. Stay through the credits to see Hellboy getting sloshed in a cemetery and talking with The Claw.

I'll give Hellboy 2 ½ Miners because it was only mildly entertaining.

'Gods of Egypt' completely ridiculous
Non-stop 'Guardians' entertain, amuse
‘Guardians’ make you put your guard down through laughter
You’ll have a riot at ‘Deadpool 2’
Laughs few, far between in 'Get Hard'