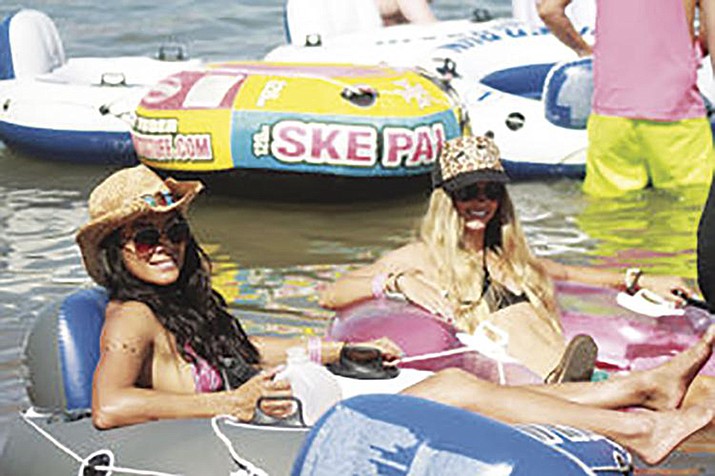 Frances Campoy, left, and Eryn Thompson of Orange County, California, set out to enjoy a girls’ day on the water during the Parker Tube Float a few years ago. (Today News-Herald photo)

Chamber Spokesman Daniel Tucker said they had received some calls from people who had participated in the Laughlin event who were asking about the Parker Tube Float, which is scheduled for June 8. He added he wasn’t sure how it would affect their numbers as they are limited in the number of wristbands they can sell.

The Parker Tube Float has become, along with Memorial Day, the Fourth of July, and Labor Day, one of the biggest weekends of the summer in Parker. It’s the main fundraiser for the Parker Regional Chamber.

Until 2017, the Parker Tube Float followed a longer route from either Patria Flats Park or County Park to the BlueWater Resort & Casino. The route was changed due to complaints from residents along the river of trash, trespassers on their properties, and confrontations with intoxicated floaters.

Las Vegas-based Golden Entertainment, which bought the Colorado Belle and Edgewater casinos in a $190 million deal earlier this year, sent a letter to Mohave County announcing the end of the popular Laughlin River Regatta tube float on the Colorado River.

The Laughlin River Regatta, which has attracted up to 30,000 people, returned last year after a two-year absence. Critics of the event, including the Fort Mojave Indian Tribe, complained about bad behavior and litter. In 2016, Bullhead City Police arrested five people during the event.

Because of the complaints, the Laughlin event was shut down in 2016. It returned in 2018 after Marnell Gaming, the former owner of the Edgewater and Colorado Belle casinos, agreed to dedicate staff and money for river cleanup after the event.