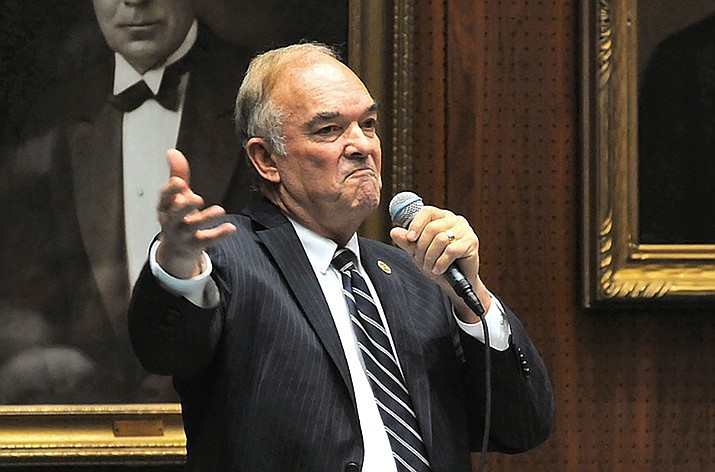 In this February 2018 file photo, Rep. Don Shooter decries the move to oust him from the House last year over sexual harassment charges. On Monday, April 15, 2019, Shooter asked the Senate Ethics Committee to determine whether former House Speaker J.D. Mesnard acted unethically in refusing to release parts of an investigative report that resulted in his expulsion. (Howard Fischer/Capitol Media Services, file)

In a letter to Sen. Sine Kerr who chairs the panel, Shooter charges that Mesnard is guilty of “intentionally orchestrating a cover-up by hiding from members and the public, critical, relevant testimony from three credible witnesses.’’ Those witnesses, Shooter said, would provide a full picture of the situation that resulted in the 56-3 vote in February 2018 to remove him from the House after his colleagues concluded he was guilty of multiple incidents of sexual harassment.

Mesnard, a Chandler Republican, declined to comment on the complaint.

Kerr told Capitol Media Services that Shooter’s complaint is not official because he failed to notarize it as required by Senate rules.

“Therefore, it would not be prudent for me to comment at this time,’’ she said. “As soon as the complaint is official, the process of review will begin.’’

The maneuver is Shooter’s latest bid to find out what investigators learned about charges made against Michelle Ugenti-Rita, then a fellow representative.

Shooter has long alleged that Ugenti-Rita, who made some of the allegations against him, was also guilty of sexual harassment. But the investigator hired by the House found “no credible evidence’’ she violated any House policies.

“That finding is a lie,’’ Shooter charges in Monday’s complaint, saying that evidence gathered in the investigation found both testimony and physical evidence.

What makes all this relevant is that Shooter, both here and through a separate lawsuit he has filed, contends that there was a cover-up and that he was forced out and that some of that was based on the complaint of Ugenti-Rita “who was also under investigation.’’

That is only partly true. The investigation also turned up various other instances of sexual harassment, with victims also including other lawmakers, lobbyists and even a woman who at the time was the publisher of the Arizona Republic.

Shooter also filed a copy of the complaint with Rep. T.J. Shope who chairs the House Ethics Committee.

Technically speaking, that panel no longer has any jurisdiction over Mesnard since he moved to the Senate. But Shooter said the House remains in possession of the full, unredacted report and all the interviews, material he said would finally provide a complete and balanced picture of what happened.

Shooter has never denied making many of the comments to women that were in the investigative report that led to his ouster.

But Shooter contends that the result might have been different -- possibly only a censure -- if they had the full story.

The demand for the ethics probe and the documents appears to be directly linked to his lawsuit seeking unspecified damages for his removal.

“Every time that they say ‘no,’ the price goes up, to the jury and to everybody else,’’ Shooter told Capitol Media Services. And both are linked to his contention that not only was he wrongfully ousted but that his reputation was unfairly damaged.

“Every day I live with the consequences of being expelled,’’ he wrote in Monday’s complaint. “No company wants to employ a sexual predator and I have been publicly branded as such.’’

Still, Shooter acknowledges his own role in what happened to him.

“I did not understand the impact of my juvenile jokes and I have paid a heavy price,’’ he said. But Shooter said that release of the documents will result in “a balance of fairness and honesty.’’