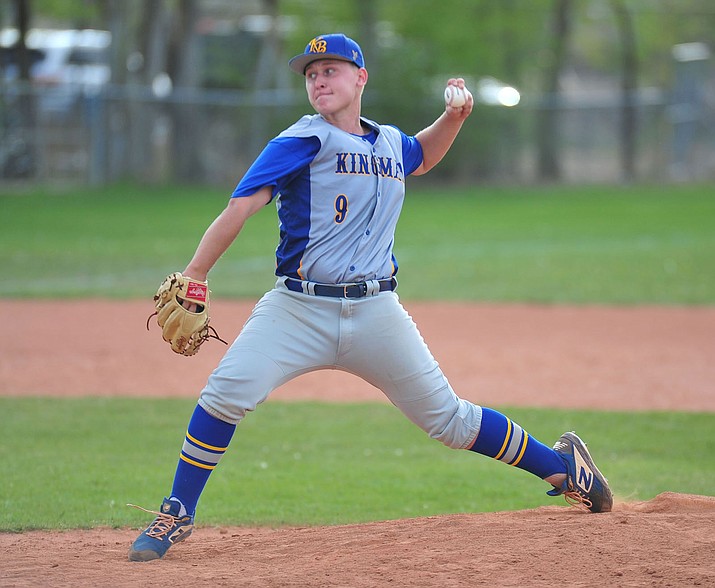 Kingman’s Rilee Araya threw a five-hit shutout with nine strikeouts Monday as the Bulldogs cruised to a 4-0 win at Chino Valley. (Photo by Les Stukenberg/Daily Courier)

Araya struck out nine in a five-hitter to help propel the Bulldogs into first place in the 3A West Region.

Kingman made sure Araya’s gem didn’t go to waste as it spread 13 hits throughout the lineup.

TJ Harviston and Luke Ness led the way with a triple apiece, while Araya helped his own cause with a RBI double in the fifth inning.

At Southside Park, the Tigers watched a commanding lead disappear in the ninth inning Monday during a 10-8 setback to the Wranglers.

Kingman Academy led 8-1 entering the top of the seventh, but Wickenburg rallied for nine runs to knock off the Tigers.

Braden Judd led the offense as he tallied two hits and drove in four runs, while Joe Sanfilippo went 3-for-4.

Bean picked up the win in the circle after striking out 12 with one walk in a complete-game effort.

Kingman jumped out to a 4-3 advantage after the second inning, but couldn’t scratch across another run.

The Lady Bulldogs were only outhit by an 8-7 margin, but seven errors proved costly in their fourth straight loss.