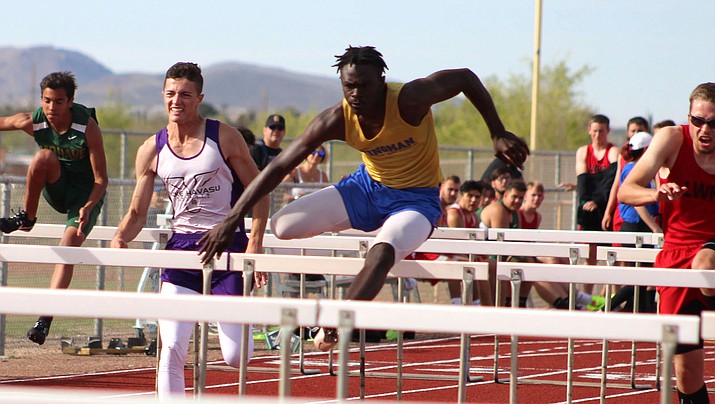 KINGMAN – As the season winds down, track athletes know they are running out of time to qualify for state. The three local high schools are well aware of that fact and they made strides towards that goal during the Havasu Last Chance meet.

Kingman Academy’s Dasia Heidorf won the 100 (13.80) and was also first in the 200 at 28.69. Meanwhile, Kingman High’s Jamal Cash continued his dominance in the 110 hurdles – tallying his eighth first-place finish in the event at 16.19. Cash was also first in the long jump with a personal best leap of 20-feet, 8-inches.

“Elijah Davis took 11 seconds off his previous best mark in the 3200,” said Vols head coach Joan Abraham. “He came out on top and will try once more next week to make that provisional mark. For a freshman though, he did a great job.”

Vols senior Kristopher Ashton notched a top finish in the shot put (44-feet), while taking second in the discus at 118-feet, 4-inches.

The Lee Williams group of Davis, Andrew Cardiff, A.J. Herrera and Cayden Robles rounded out the first-place finishers with an 8:49.00 in the 4x800 relay.

“Stephanie Broadbent moved into 26th place,” Abraham said. “If that can hold, she earned a spot at state.”

The Lady Vols also had a pair of back-to-back finishers in the 100 hurdles as Lillian Rapp was second (18.14) and Bryce Shuffler took third at 18.84.

Lee Williams senior Darleen Bland narrowly missed out on a top spot in the 400 as she finished second at 1:03.49 behind Lake Havasu’s Dailynn Evans (1:03.40).

The Vols duo of Kameron Toms and Christion Martinez kept up their success in the 100 as Toms took third (12.13) and Martinez was fourth at 12.26.

Cardiff rounded out the top performers as he set a new personal best in the 800 at 2:08.43

“Mostly this meet was a high intensity practice for our athletes,” Abraham said. “They had Yuma’s Cibola there as a new group of competitors and it caused some of them to have to work extra hard to finish. We will be anxiously waiting for the last meet of the season next Wednesday and the last day for qualifying marks to be posted. We are hopeful that we will be taking quite a few athletes to state.”

The Vols travel to the Alhambra Last Chance at 3:30 p.m. Wednesday, while Kingman and Kingman Academy remain idle until the Division III State Championship May 3-4 at Mesa Community College.

At Salt River Fields, the Tigers stayed close early but a tough fifth inning proved costly Friday afternoon in a 9-3 setback against the No. 14 ranked Yellowjackets.

Academy battled to a 3-3 tie after two innings, but the bats went quiet after that as Blue Ridge (9-6, 4-4 3A East Region) scored a run in the fourth and five more in the fifth to tally the win.

Kaden Bean went 2-for-3 for the Tigers, while Isaac Bridges drove in two runs and Hayven Potter added a RBI of his own.