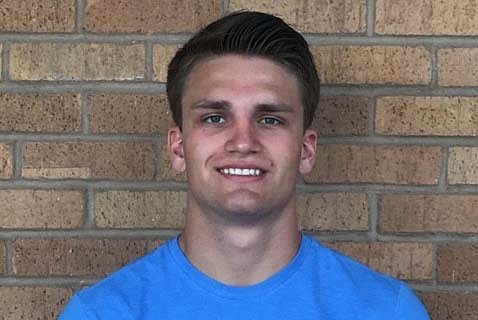 Cameron Ott was recently selected as the Student Rotarian of the Kingman Rotary Club.

KINGMAN – Cameron Ott, son of Kevin and Nicole Ott, was recently selected as the Student Rotarian of the Kingman Rotary Club. Cameron is currently a senior at Lee Williams High School. He was selected because of his high academic standards, leadership skills and athletic achievements.

Although Cameron has been a successful athlete during his days as a Volunteer, he has had equal success with his academics. Ott currently has a 4.071 grade point average as a student in the Cambridge program. He has remained an honors student all four years at Lee Williams High School and has successfully completed 4.5 credits from Mohave Community College.

Outside of the classroom, Cameron has been a leader on the athletic field. He earned his varsity letter as a freshman. He has received numerous awards including: all region linebacker, all conference running back, and 2nd team offense.

Ott has also used his leadership skills in the community. He has helped with the Special Olympics run-a-thon, volunteered as a referee for Kingman Youth Football League, coached at youth football camps, and participated in various fundraisers for local organizations.

Cameron has received the Arizona Dean’s Award Scholarship and will be attending Arizona State University in the fall of 2019.

The Kingman Rotary Club is proud to have Cameron as their Student Rotarian and wished him the best success as he enters college.