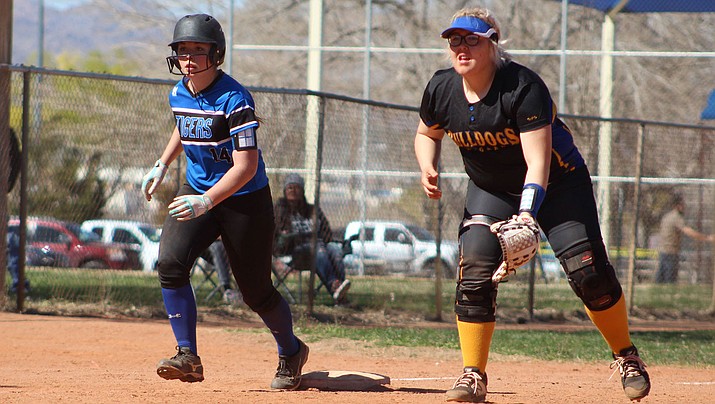 Kingman Academy’s Ammerisa Benson, left, and Kingman’s Ariana McKowan hope to lead their squads to victory in the 3A Conference Play-In Tournament. The Lady Tigers travel to Coolidge, while the Lady Bullodgs make the trek to Page. Both games start at 4 p.m. Wednesday. (Daily Miner file photo)

KINGMAN – A postseason bid is always good, but the Kingman and Kingman Academy high school softball teams are in for long bus rides to battle their opponents during the 3A Conference Play-In Tournament at 4 p.m. Wednesday.

Nevertheless, the two squads won’t let the grueling road trips stop them from tallying an upset and a chance to play in the 3A State Championship starting Saturday at Rose Mofford Softball Complex in Phoenix.

Kingman finished the regular season at 8-9, 5-5 in the 3A West Region, but had a tough stretch as it lost five of its final six games.

The Lady Bulldogs will look to put that in the rearview mirror as they battle a Lady Sand Devils squad that finished 11-5, 9-1 in the 3A North Region.

And Kingman doesn’t have to look very far for a common opponent as Page cruised to 12-1 and 12-2 wins during a doubleheader sweep of Kingman Academy on April 9.

Morgan Stephens (.426 average with 31 RBIs) and Ariana McKowan (.300 average with 26 RBIs and two homers) are the Lady Bulldogs’ top two hitters, while Lilianna Valdivia went 13-7 in 27 appearances in the circle.

Meanwhile, the Lady Tigers (6-12, 3-7 3A West Region) have not played anyone that Coolidge has battled this season.

Kiley Holloway leads Academy with a .494 batting average and she is opposed by Coolidge’s Tatyiana Rushing with a .569 average.