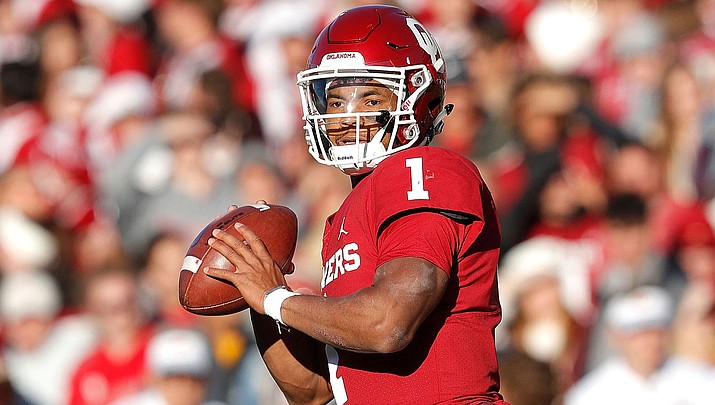 Kyler Murray threw for 4,361 yards and 42 touchdowns with 11 interceptions at Oklahoma last season, and added 1,001 yards and 12 more touchdowns on the ground. (Photo courtesy of Oklahoma Athletics)

TEMPE (AP) — Arizona general manager Steve Keim did not want to look at tape of Kyler Murray. The Cardinals traded up in last year's draft to take Josh Rosen, so it's not like they needed another quarterback.

Ever diligent, Keim forced himself to watch the reigning Heisman Trophy winner.

What he saw made it impossible to look away.

"The more and more we dug in, the more it became crystal clear Kyler Murray was the pick," Keim said Thursday night after the Cardinals took Murray with the No. 1 overall pick of the draft. "I've been doing this 20 years and I've seen guys who can throw like him, guys who can run it like him. I can tell you I've never seen the combination he brings to the table."

The Cardinals appeared to have their quarterback of the future in last year's draft, when they moved up five spots to take Rosen out of UCLA at No. 10 overall.

Rosen had an up-and-down rookie season, throwing for 2,278 yards and 11 touchdowns with 14 interceptions, but there was no indication Arizona would be seeking a new quarterback anytime soon.

The hiring of former Texas Tech coach Kliff Kingsbury during the offseason helped change the dynamic in Arizona.

The 39-year-old coach has brought his pass-first offense to the desert and Murray seems to be the perfect fit to run it. Kingsbury even recruited Murray to Texas A&M when he was the offensive coordinator there in 2012 and the two have known each other since the quarterback was 15.

"He's a dynamic talent and I don't know anybody has seen that combination as a runner and passer," Kingsbury said. "To be able to start as a pocket passer, throw from different arm angles, throw with touch then take it 80 (yards) on any snap. I'm excited."

Though small for a quarterback at 5-foot-10, Murray is strong-armed and shifty, with an ability to feel pressure and avoid big hits. He threw for 4,361 yards and 42 touchdowns with 11 interceptions at Oklahoma last season, adding 1,001 yards and 12 more touchdowns on the ground.

A backup to Baker Mayfield in 2017, he followed in the footsteps of his former teammate by winning the Heisman Trophy and being taken with the No. 1 overall pick a year later. Mayfield, now with the Cleveland Browns, quickly congratulated his successor in Norman.

"I feel we can be very dangerous," Murray said. "He's one of the best in the world at calling plays. I can't wait to get up there with him. It's been a long time coming and I hope he feels the same."

The Cardinals had been on the clock for three months, yet seemed to have a hard time deciding what to do with the fourth No. 1 overall pick in franchise history.

Murray's decision to play football instead of baseball added a layer of intrigue, even with Rosen on the roster.

Arizona's brass said it was still undecided days before the draft, leaving fans and media wondering if they would take Murray, pick a defensive player or trade down and get more value.

It ended up being Murray, giving the Cardinals two top-10 quarterbacks.

Keim said he received calls about trading for the No. 1 pick and for Rosen, but none were enough to move the needle toward making a deal.

"Bottom line, Josh is a really good football player and we're not going to get into the business of letting good football players just walk out of here," he said. "You can't have enough good depth. Needs constantly change and needs could change at that position. We know we've got a very good player in Josh Rosen."