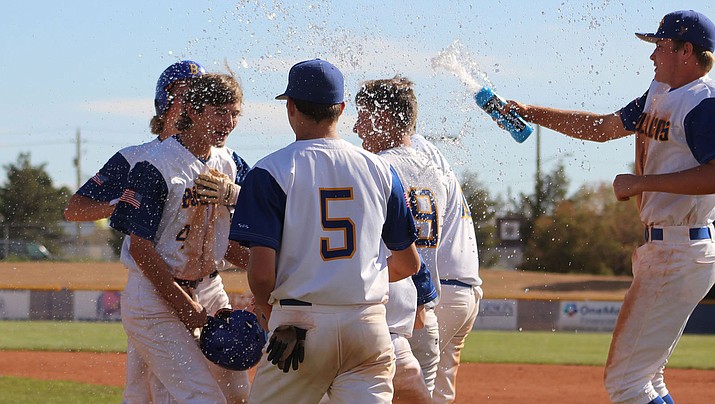 The Bulldogs were celebrating Thursday afternoon when they found out they earned a No. 8 seed in the 3A State Championship. (Daily Miner file photo)

KINGMAN – Chad Baitinger wanted to be with his team when the 3A State Championship bracket was announced Thursday afternoon, but the Kingman High School baseball coach had to travel to Wickenburg for the all-region selection meeting.

That didn’t stop the Bulldogs from making sure Baitinger knew what was going on though.

“(My assistant) coach and I were sitting at lunch and my phone started blowing up,” Baitinger said. “All the players were waiting all day for the seeding to come out. So they were all happy when it did.”

And Kingman should be pleased because it won’t have to play in the 3A Conference Play-In Tournament.

Instead, the Bulldogs will await their opponent in the first round of state Friday at the Surprise Baseball Complex.

“We’re very excited,” Baitinger said. “Our goal was to get that No. 8 spot and we did what we had to do. So I’m really happy and the kids are happy, too.”

Meanwhile, Kingman Academy (11-8) earned the No. 15 seed in the play-in tournament and will host 18th-seeded San Tan Foothills (9-9) at 4 p.m. Tuesday at Southside Park.