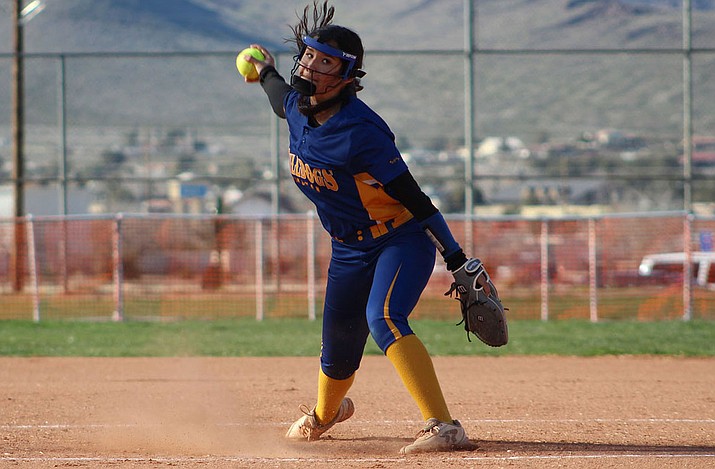 Kingman’s Lilianna Valdivia picked up the win in the circle Wednesday afternoon as she struck out six with no walks in six innings of work as the Lady Bullldogs cruised to a 16-3 win at Page. (Daily Miner file photo)

KINGMAN – What a difference a year makes.

The Kingman High School softball team traveled to Page in last season’s 3A Conference Play-In Tournament and fell 12-1 in five innings. The Lady Bulldogs made that trek again Wednesday afternoon, but took care of business this time – cruising to a 16-3 win over the No. 12 ranked Lady Sand Devils (11-5) in six innings due to the run rule.

“I’m very proud of the entire team,” said Kingman head coach Craig Lee. “We were excellent defensively the entire game. It had been 15 years since we made the playoffs. Now we have gone back to back. I believe it had been 20 years since we won a playoff game and now we have that behind us.”

It doesn’t get easier for the No. 16-seeded Lady Bulldogs as their next opponent is a mighty one – No. 1 Winslow, coincidentally also the Lady Bulldogs.

The two squads have only met once, during the 2016 Wrangler Softball Tournament in Wickenburg where Winslow won 9-6.

A few of the Kingman seniors were on the squad during that season and will look to avenge the loss at 11 a.m. Saturday at Rose Mofford Softball Complex in Phoenix.

“We are excited for Saturday,” Lee said. “We will play hard and see what happens.”

Kingman will depend on another strong outing from pitcher Lilianna Valdivia as the sophomore struck out six and walked none in six innings of work against Page.

“Lilianna did what she has done all year, just pitch strike after strike,” Lee said. “Lilianna has worked so hard to get to this point and it showed (Wednesday).”

And Valdivia had plenty of run support led by Kearra Tauta, who went 3-for-4 with a home run, double and three RBIs.

“Kearra was huge for us,” Lee said. “She started the game with a lead-off homerun. I’ve never seen her more focused for a game.”

Jordyn Dan added a 3-for-4 performance with a homer and three runs batted in, while Morgan Stephens finished with two hits, including a double, and drove in six runs.

At Coolidge, the Lady Tigers had their season come to an end Wednesday afternoon with a five-inning 16-5 setback to the No. 10 ranked Lady Bears in a 3A Conference Play-In Tournament.

Academy spread seven hits throughout the lineup, but couldn’t bounce back after allowing seven runs in the third inning.

The Lady Tigers finish the 2019 season at 6-12 and graduate no seniors.