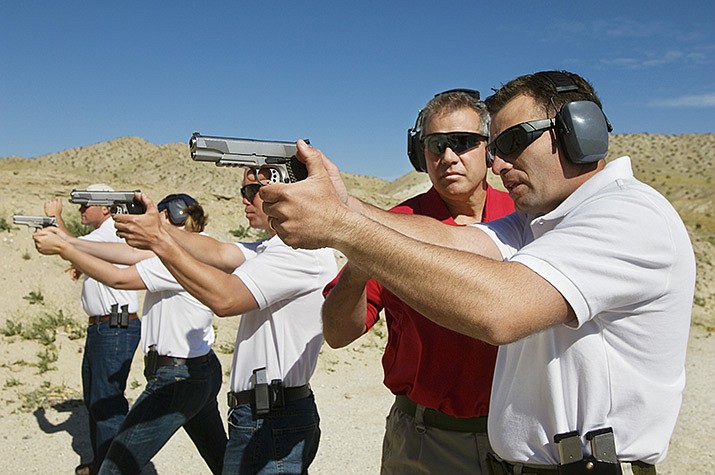 A recent national report suggests more training for police officers would decrease the number of shootings that involve them. (Adobe Images)

I can't say that I’m shocked at the number of officer-involved shootings in our state. It does seem like an everyday occurrence on the news.

It seem that after investigating what is wrong, they have decided that more training is in order. Officers need to be trained on how to deal with the mentally ill, as well as how to defuse high stress situations.

Please excuse me for not jumping up and down over this report. For years, nearly all large police departments have taken advantage of their authority. I think we can all agree that it is RARE that a police officer is ever charged with "overstepping" the boundaries of his job.

I am very thankful that our local police here in Kingman are not the trigger happy group we often see on the morning news. I guess it would make sense that the larger the department the more often a police-involved shooting will occur. I don't always see where the blame actually lies with the officer, but instead to the policies that a department puts into place.

Many years ago when I was myself a student of police science at a local college, I remember some of the rules we were taught while students.

"Never use more force than is necessary to overcome an aggressor."

I would take this to mean if someone is trying to attack you with a rolled up magazine, you would not be within your boundaries to shoot them! It seems that this particular method of teaching has totally gone.

If you are a civilian and your neighbor squirts you with a garden hose, it would likely, at worse, be a simple assault. If you squirt a policeman who is responding to your home for some reason, they will surely say, "I felt threatened by the garden hose and had no choice but to shoot him six times."

This may seem a bit far-fetched, but sadly this is what law enforcement has come to in many large cities.

Another bizarre situation is the person who may be threatening suicide. Yes, suicide is actually against the law. If you call 911 to report a friend or family member in your home who is threatening to kill himself, there is a strong chance that the responding officers will take care of his death for him. If he has closed himself up in a room and refuses to come out, the chances he will come out alive are slim.

If you want to quickly dispose of an unwanted roommate, just call 911 and tell them "you feel threatened." They will ask if they have a weapon. If you say "yes," you may find it much quicker than an eviction.

If you watch any of the "real" police shows, you will notice how often there are a dozen officers responding to a call. You may also notice they "hang around" for a very long time, even after the suspect has been put into handcuffs and is sitting in the squad car.

It often appears that each and every officer wants to somehow be involved with the "capture." As long as police can use the "I felt threatened" defense even if the threat is a rolled up magazine, nothing is going to change. Most departments provide their officers with MANY alternative ways to take down a suspect. I do not believe that their superiors ever really encourage that.

"Any false moves, such as scratching his behind should be interpreted as threatening behavior."

No one wants police officers to be hurt or killed. No one wants civilians to die for "not following orders." They are not the gestapo, after all. Sometimes it is not easy to "follow orders" when eight officers are yelling at you and telling you to "stop resisting."

Just this morning while I was working on this blog, the world news on Channel 5 did a long report on the highest number of officer involved shootings in the country. Phoenix has twice the number as New York! And Arizona holds the coveted first place!

When a police department is producing this many "shooters," there is a problem with hiring and training. Let's put the blame where it belongs and stop blaming the citizens of Arizona.

A petty crime should never result in a death sentence.