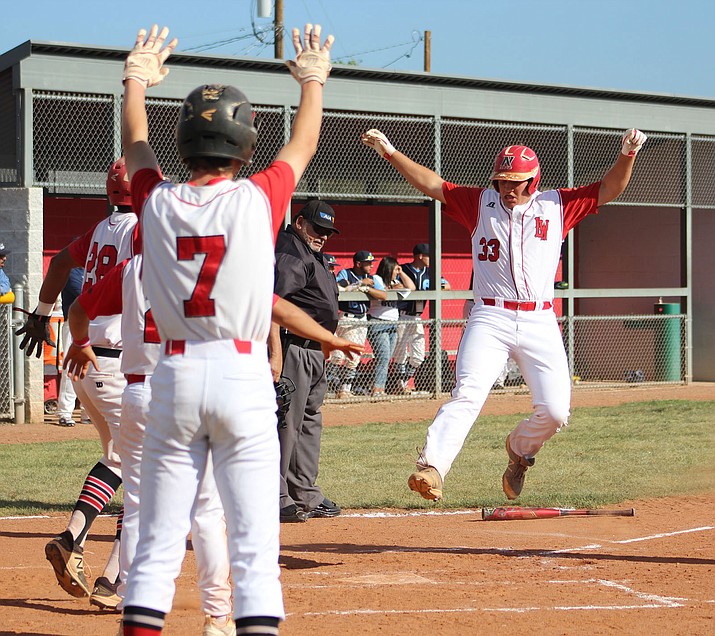 Lee Williams senior Matt Bathauer joyfully scores a run on Addis Guzman's three-run double in the second inning of a 10-1 victory over Pueblo Magnet Saturday at Dick Grounds Field. The Vols are back in action at 4 p.m. Monday when they host sixth-seeded Vista Grande. (Photo by Beau Bearden/Daily Miner)

KINGMAN – The journey to a state championship is a long and winding road that can lead anywhere, but the first step is always the most important.

The Lee Williams High School baseball team made sure it is headed in the right direction after picking up a 10-1 victory over No. 14 Pueblo Magnet Saturday afternoon in the first round of the 4A State Championship at Dick Grounds Field.

“It’s really exciting,” Lee Williams junior Addis Guzman said of the win. “It is the first ever. We’re really excited because we know we can go far in this tournament. We can compete with the teams.”

Guzman is right – the No. 3 seed Vols tallied the program’s first state championship victory and they look to add another Monday when sixth-seeded Vista Grande comes to town for a 4 p.m. contest. The Spartans cruised to a 10-0 win over Catalina Foothills in five innings and finished the regular season 14-4 overall and 7-3 in the 4A Kino Region.

“It is right back to the scouting board,” said Lee Williams head coach Patrick O’Boyle. “They’re a good team, we know that. Every team that’s in the playoffs is a good team. We just have to come out and play to our standard and things take care of themselves.”

If the Vols can replicate the performance they had against the Warriors, they will have little trouble. Lee Williams used timely hitting and a trio of pitchers to shut down Pueblo Magnet.

Guzman led the way at the plate with four RBIs, highlighted by a three-run double in the second inning that gave his team a 5-0 advantage.

“I knew all of it was on me with the bases loaded,” Guzman said. “I just stayed within myself and what do you know? I wasn’t expecting that, but it just happened.”

He had some help too, as Matt Bathauer crushed a two-run homer in the first inning and Justin Talk drove in two runs on a single in the sixth. The Vols racked up 11 hits in the game and built a comfortable 6-0 lead after three frames.

Bathauer played a role in that as the senior allowed just one hit with six strikeouts and a walk in 3 2/3 innings of work.

“Matt was very, very good – both as a pitcher and as a hitter early in the game,” O’Boyle said. “He was seeing the ball well at the plate. He had a great approach and put one out of the park in his first at-bat. He did a great job getting us ahead when he was on the mound – helped us settle in a little bit and kept us rolling.”

Bathauer looked as if he had the stuff to pitch the entire game, but O’Boyle and his staff decided last week they would let his pitch count reach 30 and go from there. With a 6-0 advantage, O’Boyle pulled Bathauer and went with Justin Martinez before Mike Bathauer closed it out.

“We did a nice job offensively getting going and that let us make the decision to kind of use the three pitchers that we did,” O’Boyle said. “And we’re going to take it game by game. It’s not going to be like that every game. That’s just what we felt. They’re a good hitting team and using the three guys is going to keep them off-balance. They don’t see a guy more than twice. So that was kind of our game plan behind that.”

Only time will tell if Lee Williams deploys the same strategy Monday, but one thing is for sure – the Vols are guaranteed two more games no matter the result against Vista Grande.

“We’re going to take it game by game,” O’Boyle said. “And keep the main thing, the main thing right now. That’s sticking together and playing as a unit. It’s survive and advance.”