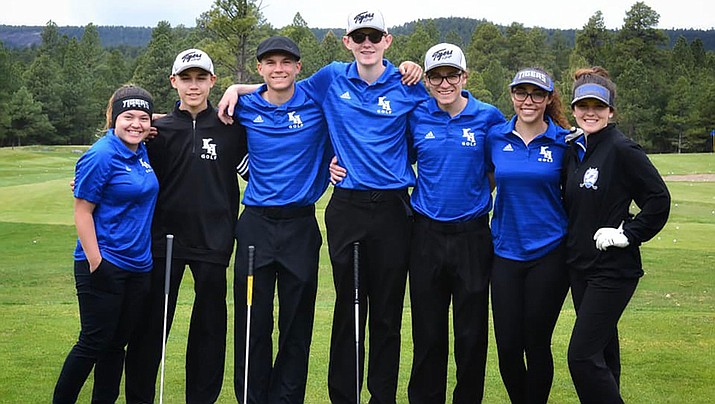 The Academy golf team had a busy week that featured two dual matches and a tournament. The Tigers finished first Thursday in Williams. (Courtesy)

KINGMAN – As the season is winding down for many squads, the Kingman Academy High School golf team is picking up the pace.

The Tigers played two dual matches during the week before traveling to Prescott Friday and Saturday for the High Desert Invitational.

He fared better Friday with a 77 and then shot an 8-over 80 in Round 2 Saturday.

The junior’s performance was impressive after how well he did in two dual matches.

Scott shot a 3-over 39 at Elephant Rocks Golf Course to help the Tigers take first Thursday against host Williams and Bagdad.

Scott led the way with an individual first-place finish, followed by Ethan Fancher in a tie for third (10-over 46) and Lance Stutzman in a tie for fifth (14-over 50).

Lady Tigers Ashlee Steed and Amanda Villeso tied for eighth with a 15-over 51, while Teagan Mosby was 10th and Kaden Maticic took 11th.

Academy was also in action earlier in the week at Meadow Golf Course and shot a 38-over 182 for second, while host Northland Prep was first with a 24-over 168.

Academy is back in action at 2 p.m. Monday for its season finale at Cerbat Cliffs Golf Course.