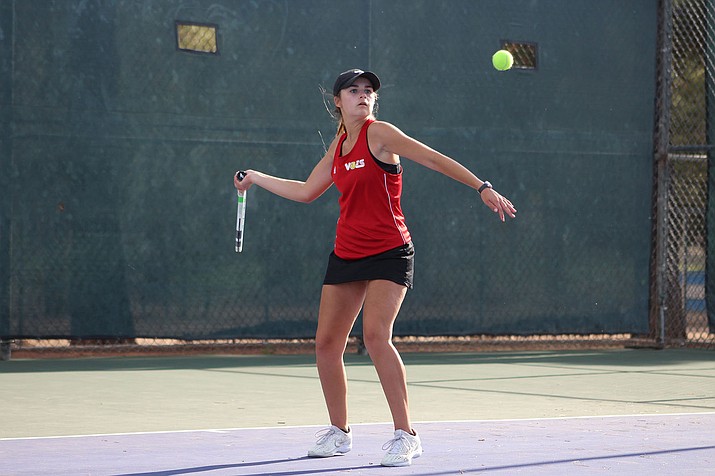 Lee Williams freshman Macie Wilson picked up a win over Buckeye Union’s Federica Borsetti in the first round of Division II State Singles Championship, but then was elimated in the second round. (Daily Miner file photo)

KINGMAN – Macie Wilson was in unfamiliar territory Friday, but the Lee Williams High School freshman did not disappoint.

Wilson battled to a 3-6, 6-3, 7-6 win over Buckeye Union’s Federica Borsetti in the first round of Division II State Singles Championship at Paseo Racquet Center in Glendale.

Unfortunately, the run came to an end in the second round when Wilson dropped a 6-0, 6-0 setback to Salpointe Catholic’s Samantha Loving.

Wilson still had a great first year on the courts though – finishing 22-8 overall, including a 10-5 mark in singles play.

At Paseo Racquet Center, Lee Williams sophomore Logan Rosenbach started off the Division II State Singles Championship with a 6-4, 6-2 victory over Peoria’s Noah Scales before falling to Thunderbird’s Kade Talbot in the second round by scores of 6-0, 6-0.

In doubles action, the Vols duo of Jordon Freeman and Kade Juelfs couldn’t advance to the quarterfinals despite earning a first-round bye. Flagstaff’s Layton Hagerman/Samuel Jensen tallied a 6-3, 6-4 upset of the No. 3-seeded duo of Freeman/Juelfs.

At Rose Mofford Complex, the Lady Bulldogs had their season come to a close Saturday afternoon with an 18-2 setback to top-seeded Winslow in five innings due to the run rule.

No. 16 seed Kingman tallied its lone runs of the game in the top of the fifth as freshman Maddy Chamberlain’s sacrifice fly scored Jayzmn Robertson. Senior Kearra Tauta followed with a RBI single that plated Jordyn Dan for the final tally.

The Lady Bulldogs finish the 2019 campaign at 8-9, but advanced to the state tournament for the second straight season.