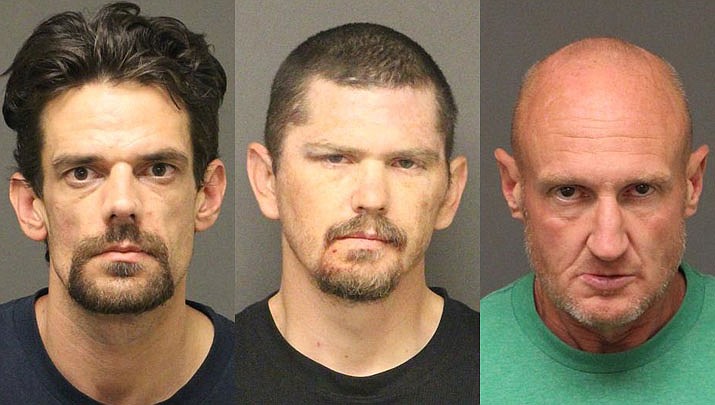 Officers responded to a structure behind a residence in the 500 block of Wilshire Avenue around 1:45 p.m. Wednesday after determining that was where the yelling and shots came from. According to a KPD release, that structure was known to be occupied by the 34-year-old Bradshaw.

The residence was surrounded by officers who, over a loud speaker, told any residents within the structure to exit. Bradshaw exited after about 15 minutes and was detained. Further investigation revealed Bradshaw, a prohibited possessor, fired several rounds from a handgun, as several rounds were found in the structure’s walls.

Kingman police says it has arrested a 34-year-old Kingman man on robbery charges stemming from trying to steal several packs of cigarettes.

Fossum was a suspect in a robbery that occurred Sunday at a store in the 500 block of West Beale Street. During that incident, Fossum is alleged to have attempted to steal the cigarettes before a store clerk attempted to stop the suspect. Fossum reportedly pushed the clerk down to the ground before exiting the store and leaving in a vehicle.

An officer saw Fossum in the passenger side of a vehicle in the area of the 2300 block of Fairgrounds Boulevard Tuesday afternoon. The vehicle was stopped and Fossum was taken into custody without incident.

Fossum, who police say admitted his involvement in the offense at the store, also had two misdemeanor warrants for his arrest on other unrelated charges. He was arrested and booked into the Mohave County Adult Detention Facility.

The clerk of the store was not seriously injured and was treated and released at the scene.

Staff at the Mohave County Adult Detention Facility received information that a female inmate, Jennifer Malynda Sparks, 38 of Lake Havasu City, had swallowed bags of drugs prior to being processed into the facility at about 5 p.m. Tuesday, April 23.

A body scan of Sparks revealed a foreign object and during interviews with staff, Sparks admitted to swallowing the items three days before surrendering herself to “serve her time.”

Sparks was transported to Kingman Regional Medical Center where doctors scanned her body. During these scans, doctors began to worry about Sparks’ heart rate and administered a dose of Narcan, which had positive effects.

Hours later, emergency room staff discovered a large amount of pills in Sparks’ stomach and an emergency procedure was conducted to remove the items. Three separate bags of pills were removed and taken into evidence.

Following last week’s five overdoses, Sheriff Doug Schuster stated that security measures are being reviewed. The sheriff was pleased the drugs were detected before they made their way into general population.

“Inmates will go to great lengths to try and circumvent the system. We must remain ever diligent to ensure the safety of the facility, our staff, and the inmate population,” Schuster said in a press release.

Kingman Police Department officers arrested Kenneth Wade Martin, age 45, of the Kingman area, according to press release. He is suspected of stealing a coworker’s wallet and charged with theft and credit card theft.

Martin was arrested at 10:15 a.m. Monday, April 22, and charged with two felonies of theft of credit cards and one misdemeanor theft.

He allegedly took the wallet from an employee’s locker inside a breakroom of a business in the 3200 block of Stockton Hill Road sometime on Sunday, April 21.

Officers located the suspect in a motel in the 200 block of W. Beale St., where he was ultimately taken into custody and booked into the Mohave County Adult Detention Facility. 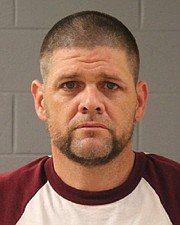 At approximately 2:15 p.m. Sunday, April 21, deputies conducted a traffic stop in the 400 block of Highway 91 for equipment violation and altered registration tags.

Deputies made contact with the driver and sole occupant of the vehicle, identified as Rosser, and noticed he displayed several nervous indicators. He gave deputies consent to a pat search which revealed approximately one gram of cocaine and drug paraphernalia.

A search of the vehicle revealed approximately 31 grams of methamphetamine, 8 grams of heroin, and a THC narcotic vape pen cartridge. Jeffery Jade Rosser was arrested and booked into Washington County Jail without incident.

Having reportedly yelled at nurses at the Mohave County Adult Detention Facility before lunging at detention officers with a pen and later elbowing another officer, 56-year-old Gregg Alan Maclaren of Kingman is facing two felonies.

Mohave County Sheriff’s Office deputies responded to the jail in reference to an aggravated assault on staff at about 2:45 p.m. Friday, April 19. Deputies made contacted with the victim upon arrival, who said a male subject was being processed by medical staff when he began yelling at nurses. The subject was identified as Maclaren.

Detention officers gave a Maclaren a verbal order to stop what he was doing and calm down. However, his behavior continued and nurses said they could not continue with their assessment. Officers then tried to restrain Maclaren so he could be taken to a holding cell.

Officers had Maclaren place his hands on the wall in order to apply handcuffs. At that time, he grabbed a pen from a desk and allegedly lunged toward officers in a stabbing motion. The officer grabbed the hand holding the pen and Maclaren dropped it. He was then restrained and escorted to a holding cell.

As he was being placed in the cell, reports say Maclaren used his elbow to strike an officer in the jaw and cheek. The officer was not injured and Maclaren was placed inside the cell without further incident.