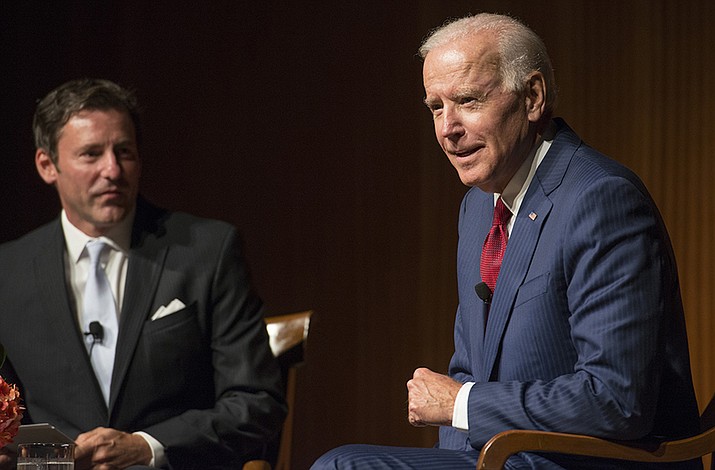 Joe Biden, the 47th vice president of the United States, was the featured guest for the Tom Johnson Lectureship at the LBJ Presidential Library on Tuesday, Oct. 3, 2017. The conversation was moderated by Mark Updegrove, former director of the LBJ Library. Biden is defending his interactions with women, saying he never meant to make them feel uncomfortable. (LBJ Library photo by Jay Godwin)

For the third time in his political life, Old Joe Biden has started down the road to the White House.

On Thursday he used a misleading and Trump-bashing video to announce he’s running because he wants to save the country from four more years of Donald Trump.

The 76-year-old immediately became the front-runner in the Democrat Party’s over-crowded presidential primary, thanks to his name ID and his long, gaffe-filled career as a liberal senator from Delaware and loyal Obama VP.

Biden is the Democrat’s strongest candidate for many political reasons, but my big question is whether he still has that feeling in his gut that all presidential candidates must have to succeed.

His first and probably hardest feat will be to win the nomination of his own crazy party.

It’s not that he is too old, too male, too white, too establishment or too creepy-feely for the new Democrat Party, which has suddenly lurched hard left, splintered into factions and become leaderless.

It’s not that he supposedly treated Anita Hill unfairly as a senator three decades ago at the Clarence Thomas hearings.

Or that he held some embarrassing, now very politically incorrect, not-very progressive positions on race, crime, civil rights and forced school busing in the 1970s, 1980s and 1990s.

It’s that Old Joe is too darn moderate for the Democrats.

Bernie Sanders, Kamala Harris, Cory Booker, Pete Buttigieg and the other increasingly radical presidential wannabes he has to defeat in the primary have spent the last several months promising they’ll give everyone in America free healthcare, free college tuition and free whatever else they want or need from government.

They all are trying to be more radical than Sanders, the lifelong socialist who’s even older than Biden and not the least bit ashamed to admit he’s a millionaire with three homes.

Meanwhile, Biden’s campaign pitch to voters apparently is going to be a plate of boring liberal leftovers from the last century.

It’s likely to include raising taxes on the rich, rewriting tax laws to help the middle class, jacking up the federal minimum wage and spending a trillion or so on fixing the infrastructure.

Biden’s candidacy is not going to please or energize the young radicals in the noisy Alexandria Ocasio-Cortez wing of his party.

Yet, he’s probably the only Democrat presidential wannabe with a realistic chance to defeat President Trump in 2020, mainly because his moderate platform could win back the voters in Pennsylvania, Michigan and Wisconsin that Hillary lost in 2016.

Still, it’s hard to deny that Old Joe is four years past his elect-by date.

His best chance to be president – his only real chance - was to run in 2016, before everything in national politics was turned upside down by Trump’s victory.

Going into that election lots of Republican voters hated Trump so much that they were looking for an exit ramp. But they wouldn’t take the Hillary Off-ramp and vote for her because they despised her even more.

If Biden had been running in 2016 instead of Hillary, many Republicans might have seen him as the lesser of two evils, and he might have defeated Trump.

In the last two-and-a-half years President Trump has made most Republicans extremely happy, so very few GOP and independent voters in those key Rust Belt states will be looking for someone else to vote for in 2020.

Now that he’s in, Biden will be running up a steep hill from now until next fall. He’ll be beaten black and blue by his own party and Republicans.

He thinks he can raise hundreds of millions of dollars, withstand the leftward pull of his party, figure out how to win the Democrat primary without having to become a member of the Communist Party and then rush back to the political center to capture enough Rust Belt voters to defeat Trump in the general election.

Good luck with that plan, Old Joe. You’re going to need a lot of it if you aim to save the soul of America.