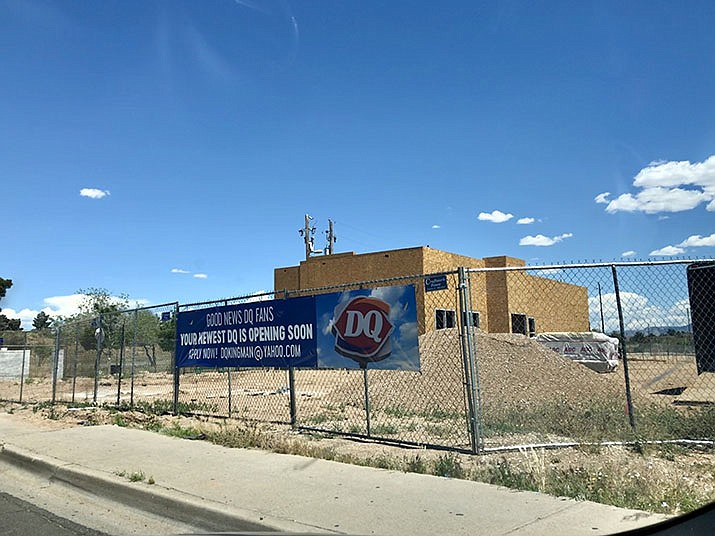 KINGMAN – City residents are impatiently waiting for one of America’s favorite soft ice-cream providers. Dairy Queen is majestically late, but it should open at 3152 Stockton Hill Road at the end of June.

“Our anticipated date of opening is end of June, but with these new construction projects it’s very hard to predict an exact date,” said Raman Kalra, the company’s representative based in Phoenix.

Construction was first reported to have a completed by date of Dec. 31, 2018, but that has long passed. Most of the framing was done in March and April 2019. With the beginning of May, construction is still not completed, but a new sign on the fence informs passersby that the new location is coming soon and there will be jobs available.

For more information regarding employment at Dairy Queen, email DQKingman@yahoo.com.

For Dairy Queen, it is a comeback. It reigned in Kingman before, in the same shopping center, which closed in November 2008. But people who lived in the area for decades remember another location active in the ‘70s – at 208 W. Andy Devine Ave. where Bangkok Thai Cuisine is now.

The first Dairy Queen opened in 1940 in Joliet, Illinois, introducing a variety of frozen foods to the market: their famous blizzards, malts, and milkshakes. By 2014, it had more than 6,000 locations in 27 countries, including such remote places like Kuwait and the Cayman Islands.

Kingman has been deprived of all the above for 11 years.

Dairy Queen is majestically late, but it is on the way.