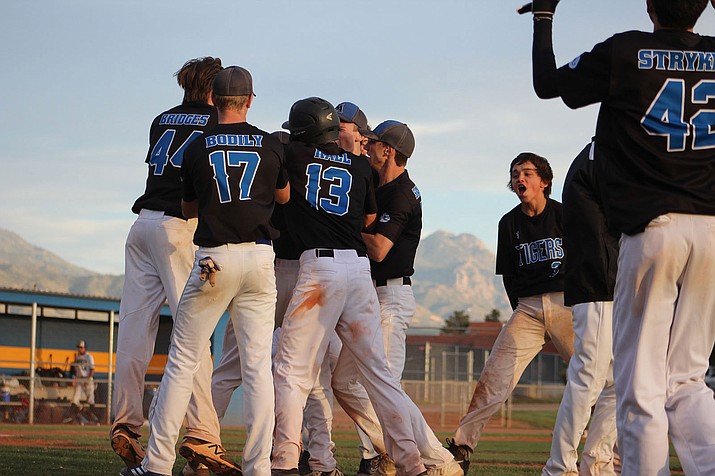 KINGMAN – It is safe to say no one expected a 13-inning game Tuesday afternoon.

But that’s exactly what happened as the Kingman Academy High School baseball team battled to a 1-0 victory over No. 18 San Tan Foothills in the 3A Conference Play-In Tournament at Kingman High School.

“This is probably the biggest win of the season because we needed this to go on to state,” Academy junior Kaden Bean said.

And it may not have happened if it wasn’t for Bean as his single scored Wyatt Hall for the game-winning run that immediately had the Tigers celebrating in the bottom of the 13th.

“It was great,” Bean said of the base hit. “It was exciting – best moment of my life, probably.”

Bean also helped his own cause on the mound by allowing just one hit with three strikeouts in 4 2/3 innings of relief.

However, the pitching on both sides was phenomenal.

“There weren’t a whole lot of hits tonight,” Tigers head coach Bill McCord said. “And there weren’t any hit very hard against either pitcher. Hats off to them, they’re a solid team. The coaches and the kids are really nice. It was a very respectable ball game.”

But someone had to win and Academy did what it needed to in the 13th frame. Hall started it off with a walk, followed by Ryan Hurley reaching on a fielder’s choice. Bean stepped up with the game on the line and came through in the clutch.

“When he came in from pitching I told him, ‘Get up there and hit the ball and win this game because if you do, you can pitch Friday,’” McCord said of his conversation with Bean. “So it was kind of cool to see that.”

Bean and Joey Sanfilippo led Academy with two hits, while Gulko and Tanner White each had two base knocks to pace the Sabercats.

“Both teams played really well,” McCord said. “The pitching on both sides was fantastic.”

Even San Tan Foothills’ Trevyn Badger had a respectable line despite giving up the game-winning run. The junior allowed three hits with seven strikeouts and four walks in four innings of relief. He also worked out of a bases-loaded jam in the 11th to give his team a shot.

But the Sabercats couldn’t find a way to scratch across a run as Academy outhit them, coincidently, by a 7-6 margin.

The No. 12 seed Tigers are back in action at 4 p.m. Friday against fifth-seeded Yuma Catholic in the first round of the 3A State Championship at Surprise Baseball Complex.

“We have a couple of days to get recharged,” McCord said. “We’ll have a light practice (Thursday). Not a lot of throwing. I think we’ll be good.”