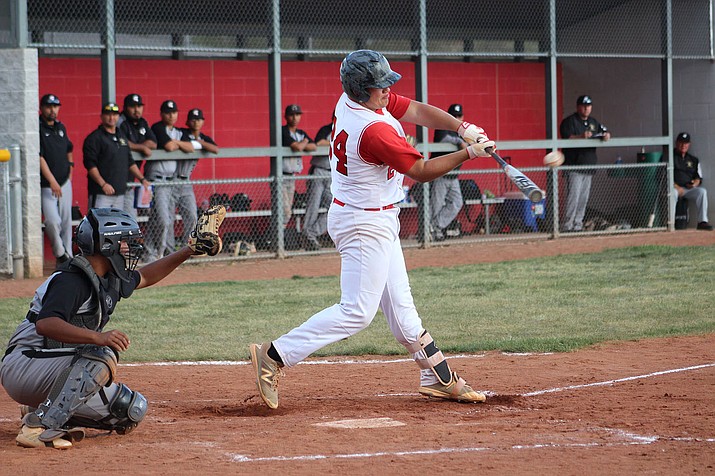 Lee Williams senior Mike Bathauer connects on a three-run homer in the fifth inning of an 8-4 loss to Vista Grande Monday at Dick Grounds Field. The Vols are back in action at 4 p.m. Wednesday against Saguaro at HoHoKam Stadium in Mesa. (Photo by Beau Bearden/Daily Miner)

KINGMAN – It is never easy to lose a game, but that feeling is magnified when the setback comes at home in the second round of the 4A State Championship.

There is a silver lining though – the No. 3 seed Vols are still in the hunt as the tournament is double-elimination.

However, the Vols will have their backs up against a wall in a win-or-go-home contest at 4 p.m. Wednesday against No. 7 seed Saguaro at HoHoKam Stadium in Mesa. The Sabercats are coming off a 14-9 loss to No. 2 seed Salpointe Catholic.

Both teams look to keep the season alive and Lee Williams will quickly put its setback in the rearview mirror.

“We just have to forget about it tonight and get back on it tomorrow.” O’Boyle said.

It didn’t appear the Vols would have to erase the game from their memory after Mike Bathauer crushed a three-run homer in the bottom of the fifth. The shot gave Lee Williams a 4-1 advantage and shifted the momentum in favor of the home team.

But just as quickly as the Vols took the lead, the Spartans answered in the top half of the sixth when Emilio Barreras’ three-run homer knotted the score at 4-4. Vista Grande kept it going as pinch-hitter Abraham Armenta’s two-run double put his team out in front for good.

“They got something going where they used their momentum to their advantage,” O’Boyle said.

Unfortunately, the Vols couldn’t do the same as the four-run fifth inning was all they could muster.

It wasn’t for lack of trying though.

Lee Williams loaded the bases in the bottom of the seventh, but ended the game with a force out at third base.

Bathauer was dealt the loss after he allowed six earned runs on 10 hits with eight strikeouts and one walk in 5 2/3 innings of work. The senior was dealing on the mound early – holding the Spartans scoreless through four innings and striking out five of the 12 batters he faced.

“Mike threw a really, really good game,” O’Boyle said. “(But) they hit the ball when they were supposed to and that’s part of the game. Credit to them – they were ready to go. And credit to Mike, he threw a great game. Both teams battled very, very hard and it was a well-fought game on both sides.”