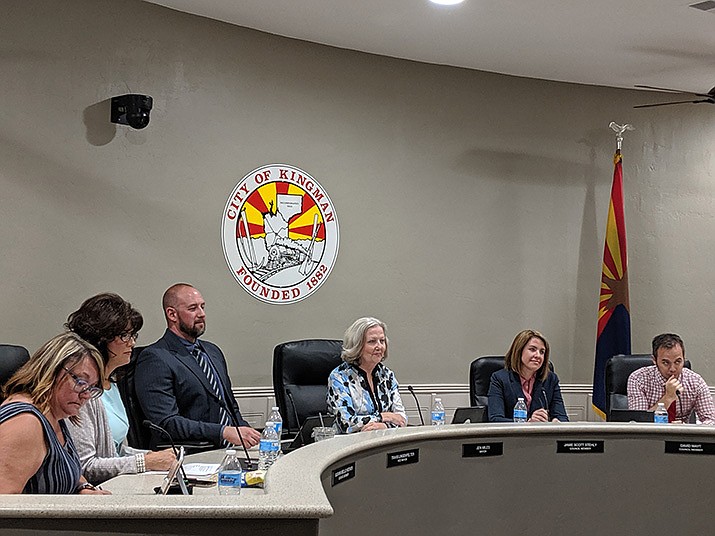 Modifications to the Sunbelt Park Master Plan, which allow for additional field space, will be considered by Council at Tuesday’s meeting. (Courtesy file photo)

KINGMAN – City Council could decide whether to approve an updated layout for the Sunbelt Park Master Plan at its meeting set for 6 p.m. Tuesday, Aug. 6 in Council chambers, 310 N. Fourth St.

The work session will begin at 5 p.m. at the same location and includes only two items. Council will receive a water resources update and will discuss water sustainability projects, in addition to City commission goals.

Councilmembers could approve a job order proposal from Freiday Construction for the extension of a sewer main from Thompson Avenue along the west bank of the Mohave Channel and along Devlin Avenue. The project will end at the intersection with Bank Street.

Council will also consider approval of a resolution necessary for the creation of a career technological education courses at Kingman High School, Lee Williams High School and Kingman Academy of Learning. Homeschooled students and recently graduated 18-year-olds will also be eligible.

The last item under old business is the Sunbelt Park Master Plan. Input received from the Kingman Youth Soccer League has resulted in modifications to the plans that would allow for additional space for soccer fields. “Many” trees were removed for the new proposed plan, according to the agenda, as were the volleyball court and a basketball court.

Two property rezones will be considered on Tuesday. The first request is from Mike Fetrow for a rezone of property on the east side of North Kenneth Road and the west side of North Adams Street from commercial, service business to residential multiple family, low density. The change would allow for the development of two single-family residences on two 5,000-square-foot lots.

The second rezone request comes from Cary and Charlote Sherwood, who want a manufactured home and garage to be placed on a 1-acre property at 3958 N. Rainbow Drive. That would require a rezone from residential multiple family, low density to rural residential.

In other business, Council will consider appointments to the Clean City and Parks commissions, a land sale at the Kingman Industrial Park, an intergovernmental agreement with the Drug Enforcement Administration, and amendments to the subdivision ordinance.

Information provided by City of Kingman