‘Hobbs and Shaw’ is a near perfect movie 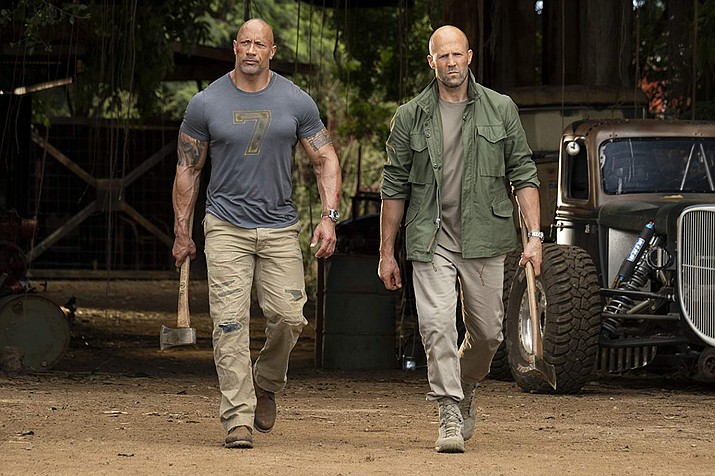 Stop what you're doing. Get to the theater, get yourself a big bucket of popcorn and something to drink. Get lots of napkins, too, and something to hold your snacks in place because “Hobbs and Shaw” starts right off with the action. What relation this movie has to the “Fast and Furious” franchise escapes me, except that the two characters Hobbs (Dwayne “The Rock” Johnson ) and Shaw (Jason Statham) each appeared in the franchise.

Opening sequences, as exciting as they are, illustrate how different the two characters are. Each has their own method to get to the same goal. One with brute force, the other with finesse. The fight choreography is fluid and amazing. Creative weapon usage is definitely imaginative like the way a tattoo needle and a bottle of champagne are used.

There's a creative bond between Hobbs and Shaw, although externally they don't mix. Much like oil and vinegar, yet on a salad it's pretty good. And this creative mix of talent works. It works very well. Having two outstanding actors, Johnson and Statham, mesh so well together you'd think it was a private club no one else could enter. Now throw in Ryan Reynolds and Vanessa Kirby (as Hattie Shaw) into the mix. Reynolds didn't disappoint with his comedic timing and witticisms. I gut-laughed more in this action film than I did with some comedies. Kirby plays Shaw's British intelligence agent sister. Kirby's fight choreography could go head-to-head with anyone with her impressive moves.

Idris Elba (as Brixton) plays the bad guy and is referred to as the “black superman” and as “the terminator” in the movie. The motorcycle stunts are worth the price of admission. He's also been mechanically-enhanced and is more similar to the terminator than Robocop. Elba does some well-choreographed fight scenes, but not as many as Hobbs, Shaw and Kirby. It's refreshing to see female roles being made equal to that of male roles, especially in physical confrontations and brain power. Kirby is far from the Barbie persona and nearly steals the show.

The action is almost continuous and only slows down when the characters' back stories are being played out. There's a definite lull toward the last part of the movie, which is a shame because there seems to be a kind of rhythm and pace going that comes to a screeching halt when the story behind Johnson and his Samoan family, and Statham’s and Kirby's separation, all come to light. With a movie like this I don't think the audience is coming for the back story. Thankfully, not a lot of time is spent on it.

Beautiful scenery and camera shots of Samoa help smooth out the jittery filming of some of the fight scenes.

There's enough fights, explosions, fights and more explosions, along with car chases and beautiful stunt work to keep everyone interested. Do we really care that Kirby's character and Statham's character are brother and sister? Not really, but it does add a bit of a wrinkle when Johnson and Kirby seal the deal.

The movie runs a quick 133 minutes and is rated PG. I could watch it again and again. I'll give “Hobbs & Shaw” an amazing 5 out of 5 Miners.

For franchise fans, 'Furious 7' a crazy-great ride [with video]
'The Jungle Book' is simply awesome
‘The Dark Tower’ is a little better than OK
Movie review: 'Expendables 3' sticks with what the franchise does best
Eye candy and action mark latest 'Trek'