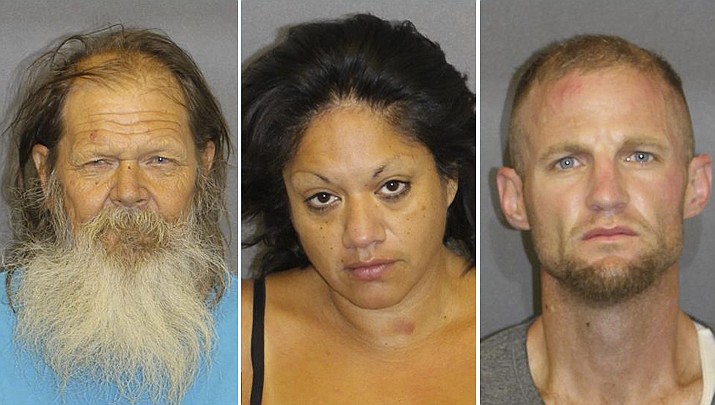 Mohave County Sheriff’s Office deputies arrested Byron Kevin Blokzyl, 61 of Topock, for aggravated assault with a dangerous instrument, resisting arrest, unlawful flight from law enforcement, all felonies, and misdemeanor harassment. At approximately 11:15 a.m. Thursday, Aug. 1, deputies responded to a residence in the 4500 block of Tule Drive in reference to a harassment incident.

The reporting party advised that a male subject, known to them as Blokzyl, had been driving past their residence for the past few hours and repeatedly honking his vehicle’s horn. The female victim further advised that as she was walking to her property from a neighboring residence, and she observed Blokzyl’s truck driving toward her.

She advised that Blokzyl swerved his truck toward her and accelerated, causing her to jump out of the way to avoid being struck by the truck. Deputies canvased the area and responded to Blokzyl’s residence, but were unable to locate the involved vehicle.

Deputies parked down the street from the victim’s residence and a short time later, observed Blokzyl’s truck approaching the residence. Deputies noted that Blokzyl applied his vehicle’s horn well before driving past the residence until well after.

Blokzyl ignored deputy’s commands and began walking toward his residence. The deputy approached Blokzyl and attempted to restrain him, however Blokzyl continued to resist by pulling away from the deputy and attempting to turn away from him.

A struggle ensued and the deputy placed Blokzyl on the ground, where he was able to apply restraints. Blokzyl continued to resist and try to pull away from the deputy while being walked to the deputy’s vehicle where Blokzyl began slamming his head against the vehicle.

A second deputy arrived on scene and Blokzyl complied with orders to get inside the vehicle. During the altercation, deputies smelled the odor of an intoxicating beverage coming from Blokzyl and observed his eyes were red and watery. A blood sample was obtained to determine a blood alcohol concentration at the time of the incident and was sent off for further testing.

When asked, Blokzyl denied attempting to strike the victim with his vehicle. Blokzyl was arrested and booked into Mohave County Adult Detention facility without further incident.

Kingman resident Andrea Maria Espinoza, 40, was arrested by sheriff’s deputies Saturday, July 27 after being stopped for walking in the center of the roadway.

Deputies observed a subject, later identified as Espinoza, walking in the roadway at about 9 a.m. They made contact and could smell the odor of marijuana coming from her person.

When asked if she had anything illegal in her possession, Espinoza reportedly told deputies that she had methamphetamine in her purse. A search then revealed 0.5 grams of methamphetamine and a glass pipe.

Andrea Maria Espinoza was arrested for dangerous drug possession and drug paraphernalia possession, both felonies. She was booked into the Mohave County Adult Detention Facility.

At approximately 10:30 a.m. Friday, July 26, deputies were conducting patrol in the area of Cane Beds Road and observed a vehicle with a non-functioning brake light. The deputy pulled behind the vehicle and observed the vehicle didn’t come to a complete stop or signal its turn onto Highway 389.

Deputies conducted a traffic stop on the vehicle and observed the driver and sole occupant was hastily moving around the inside of the vehicle. Deputies identified the driver as Barlow from previous incidents. Deputies observed Barlow was gripping the steering wheel so tightly his knuckles were turning white and was grinding his teeth.

Deputies knew Barlow to have an active arrest warrant and advised he was going to be detained for his warrant. At that time, Barlow made a quick motion to grab for his seatbelt and deputies reached inside the vehicle to stop Barlow from attempting to flee.

Deputies attempted to open the car door but the doors were locked. A struggle ensued, and Barlow was able to free a hand and place the car in drive and sped off. The vehicle struck the deputy in the arm and shoulder, knocking him to the ground.

The deputy was quick to get into his vehicle and begin a pursuit westbound on Highway 389. The deputy caught up to the vehicle and observed Barlow driving at a high rate of speed and passing vehicles in a no-passing zone. Due to Barlow’s bold actions, the deputy slowed and discontinued the pursuit.

Colorado City Marshall’s Office and Washington County Sheriff’s Office then met with the deputy and an action plan was established to continue looking for Barlow and the involved vehicle. After approximately two hours of searching, no sign of Barlow or the vehicle was detected. A short time later, deputies received word that Barlow was traveling on foot and was using his cellphone to contact family.

Dispatch retrieved the phone’s GPS coordinates that led deputies to the vehicle, which had been abandoned in the desert area off of Uzona Avenue just slightly over the state line into Utah.

A second ping of Barlow’s phone revealed GPS coordinates in the desert near Canaan Gap and teams proceeded into the area. A short time later, Colorado City marshalls located Barlow and placed him into custody. Ezra Jessop Barlow was arrested and booked into Washington County Detention Center without further incident.

At approximately 9:45 p.m. Monday, July 22, deputies were patrolling in the 3300 block of Northern Avenue and observed three subjects riding bicycles in the middle of the roadway with no lights.

Deputies conducted a traffic stop of the bicycles and two of the subjects produced identification. The third subject, later identified as Luciano, told deputies she did not have identification and gave deputies a false name.

Luciano was arrested and booked into Mohave County Adult Detention Facility without incident.