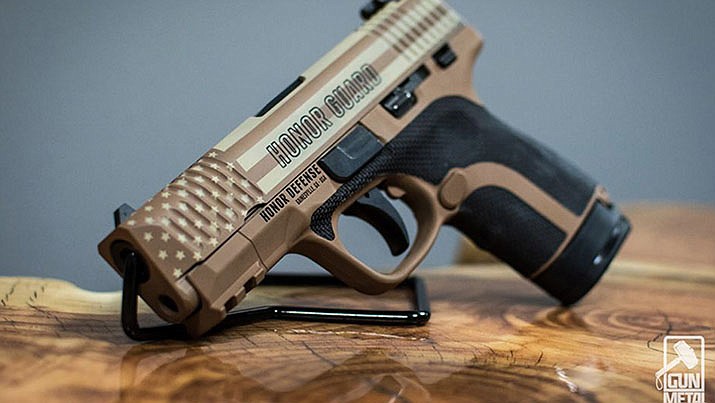 Minority Leader Charlene Fernandez, D-Yuma, is pulling out all of the proposals that the Republican-controlled Legislature refused to debate, much less consider, in the past five years.

These range from universal background checks and bans on military-style assault rifles to limits on high-capacity magazines and making it a crime for adults to leave weapons where children can get them.

Fernandez told Capitol Media Services that the mass shootings that occurred this past weekend in El Paso and Dayton may finally provide enough impetus for lawmakers to consider these measures.

But the idea of calling all 90 lawmakers back to the Capitol in the wake of the incidents is not picking up any immediate support of Republican legislative leaders.

In fact House Majority Leader Warren Petersen, R-Gilbert, lashed out at Fernandez for even bringing up the subject.

"I find it disturbing that she will use a tragedy for political purposes,'' he said.

Reaction from other Republicans was more measured. Senate President Karen Fann said she has not had the opportunity to speak with her members since the incidents.

"When everyone returns from summer obligations, we will be meeting to discuss a number of items for next session,'' she said.

"This is a very charged issue,'' she said. "I'm sure we will have many ideas with polar opposites on how to fix it.''

But Fann said that finding a "good bipartisan solution'' will depend on first "identifying where the problems actually lie.''

And House Speaker Rusty Bowers saw no purpose in calling in lawmakers, at least at this point. "Without a clear idea of what we hope to pass, I have doubts that the Legislature can accomplish anything meaningful if we convene a special session,'' he said. Instead, Bowers wants to develop what he called "pragmatic policy proposals that will protect our friends and families from violence, including gun violence.''

More to the point, the speaker said these have to be ideas "that can actually receive the support needed to pass out of the Legislature.''

Even Sen. David Bradley, D-Tucson, who is Fernandez's counterpart in the Senate, questioned the wisdom of convening a special session before there is a plan that can get the necessary 16 votes in the Senate and 31 in the House, as well as the signature of Gov. Doug Ducey.

"The key would be the governor saying this is the No. 1 priority of his and convening the leadership of both sides to hammer something out,'' Bradley said, before a session can be called.

As for the governor, press aide Patrick Ptak said his boss is "willing to work with legislators from both parties'' and is "hopeful both sides can come together to advance common-sense policies that will make a meaningful impact.''

But no call for a special session, at least for now. And when Ducey came out with his own school safety plan in 2018 he specifically excluded the universal background checks that the Democrats want, a move they say will close a "loophole'' in the law that allows people to buy weapons at gun shows without having to pass the same background investigation required if they bought a weapon from a licensed dealer.

Fernandez, however, said she believes that the state's demographics have changed since the days when the GOP majority first began rejecting any gun-control legislation out of hand.

That's not just an ethnic or racial thing, she said.

"I'm talking about women that are coming to the polls,'' Fernandez said. "They're challenging the status quo of the way men have been doing thing at the state Legislature.''

That, she said, is reflected in the fact that Democrats picked up four House seats in the 2018 election, reducing the GOP edge to 31-29.

And yet she said that Bowers, fearful of Democrat ideas picking up the occasional Republican vote, has populated the committees that hear the bills – the pathway to a full House vote – by stacking several committees with Republicans to ensure that doesn't happen.

The Judiciary Committee, for example, is 6-4 Republican.

And there is no requirement for an even number of members on that panel through which most gun legislation would need to pass.

And the Appropriations Committee is stacked even more at 7-4.

Fernandez said she believes that if the Democrat bills made it to the floor that there is the public sentiment – and the votes – for at least some of them to become law, especially given the headlines.

"If you really want to hear what's changed, it's these mass shootings,'' Fernandez said.

"I mean, you hear about them every day,'' she continued. "We hear about a mass shooting, we go to bed and wake up the next morning and there's another one.''

And Fernandez said these are not partisan issues.

"This has got to stop,” she concluded.