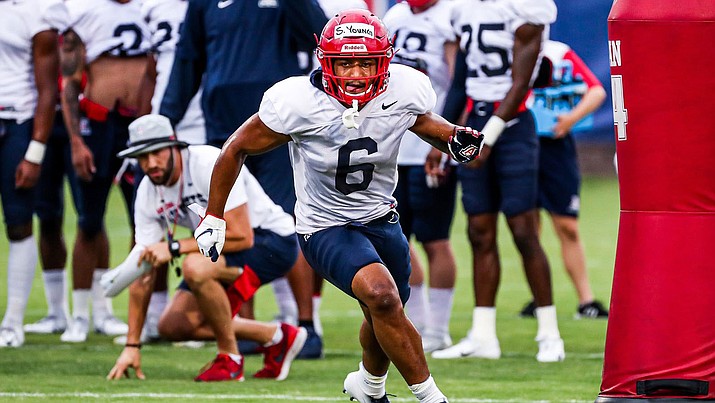 Scott Young Jr. is a key returnee for the Wildcats after leading the team with three interceptions last season. (Photo courtesy of Mike Christy/Arizona Athletics)

TUCSON – For those who have followed the Arizona Wildcats fall camp through the first 10 days, two major themes have emerged: An emphasis on consistency, and a focus on relationships.

Both were on display again this week, especially the latter.

Trust built between teammates, trust established between coaches and players, both are crucial parts of a high-performing team.

While these relationships naturally form through time together on the field, effort put in off the gridiron is also key.

“That’s my biggest thing, I just want to be a great brother to my teammates. Everything is not about just on the field, you have to build these relationships off the field,” safety Scottie Young Jr. said when asked about mentoring incoming freshmen.

Defensive coordinator Marcel Yates mentioned something similar when asked how coaches can best show they care about players, not just as athletes but also as people.

Scottie Young Jr. returns to the Wildcats secondary for his junior campaign after having logged 20 appearances and 18 starts over the last two seasons.

Since 2017 he has tallied 91 total tackles, 6.5 tackles for loss, three interceptions, eight pass breakups, and one pick six.

The 5-foot-11 safety led the Cats with three picks last year and returned one for a touchdown against Cal on Oct. 6.

“[This year’s defense] is one unit,” he said. “We’ve got a lot of guys healthy right now. We’ve got depth and a lot of speed and physicality out there – guys flying around and having fun.”

Eddie Siaumau, who hails all the way from American Samoa, joins the Cats in 2019 as a true freshman linebacker.

“This young man is very rangy. He played all over the field in high school so he can play in space and make plays at multiple positions on defense,” Wildcats defensive coordinator Marcel Yates said of Siaumau on signing day.