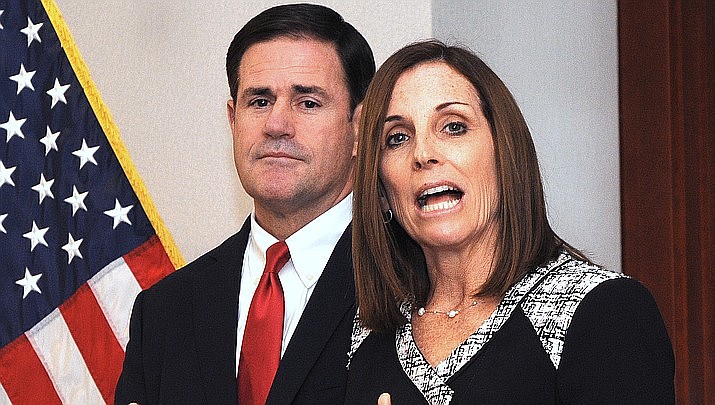 McSally: Taking care of aging Americans – McSally writes nice articles about seniors, BUT she votes with her party on labeling Social Security and Medicare “entitlements,” and supports McConnell’s plan to cut and privatization both! Perhaps she thinks seniors are too decrepit to notice her voting record.

McSally: Taking care of aging Americans –Sinema is busy working in Washington on legislation to help working class families. What is McSally doing? Writing fluff pieces as “our senator” for local papers. I think she should do her job and quit campaigning!

We Republicans don’t want that rapper: No rapper, please! Also, would you please check Republicans at the door and eliminate those on the government dole or who can’t pass a drug test.

Nine killed in Ohio: Elizabeth Warren was out telling us how Trump caused the El Paso shootings as we learned, the Ohio shooter, a registered Democrat, was a big Warren supporter. So by leftist standards, Warren must have caused the Ohio shootings. Goose/gander.

OK, Republicans of Kingman: Is this what you want? Walmart people! What is it going to take to understand there is no more Republican party. Only the hate and divide Trump party. Add Moscow/Massacre Mitch, and this is where we are.

Residents denounce county commissioner’s comments on race: Gillette has a First Amendment right to state her personal opinions, even if others disagree, as long as she does her job properly. Those calling for her removal should look in the mirror and see the truly intolerant.

Trump vows action – 31 deaths: Muted response? White supremacy? Rather than race out like crazed nut Beto O’Rourke and Ryan did, he let the dust settle, got the facts – then spoke. Ohio shooter, left-wing Elizabeth Warren supporter has been scaring others since high school.

Planning and Zoning commissioner: Any member of a commission that serves the public should separate their personal views from their political views, or they should not be on that commission.

Residents denounce county commissioners comments on race: Supervisor Gould missed the point on this one! While Ms. Gillette may not “shoot up a Walmart,” she holds a county position where personal BIAS may interfere with her doing her job objectively and fairly. That’s the problem.

GOP picnic in the Hualapais: Four days, 31 dead in three mass shootings in our nation, each linked to white supremacist rhetoric. In this tragic climate, the GOP chooses to raffle off GUNS at their picnic, while demonizing Democrats and immigrants. Have they no decency?

Trump vows action after mass shootings claim 31 lives: The best action for Trump might be to stop ginning up people with anger and hatred toward immigrants, people of color, the press, and anyone who criticizes him! Words have meaning. He must stop playing games with people’s lives.

Ducey orders flags at half staff for Texas and Ohio: If we can’t get a handle on sensible gun regulation, we may as well leave them there at half staff. Time to realize Americans should have the RIGHT to go out of our homes, in public, safely.

Trump vows action after shootings claim 31 lives: Yeah right! Stop being the “Tweeter-in-Chief” and we might tend to believe you. Nah, we can’t believe anything you say so forget it. You and Bill Clinton deserve each other.

Our money should be going to help retired and fixed income folks: How totally “unconservative” this article sounds. What about everybody pulling themselves up by their own bootstraps?

Residents denounce county commissioner’s comments on race: Does Gillette realize that most of the Christians in this world don’t share her views on race? What would Jesus think?

Freethinkers only tolerant with those who agree with them: Right on. One great book for freethinkers is “Original Intent” by David Barton. Jefferson thought Christianity so important he authored The Life and Morals of Jesus of Nazareth for the Indians. Thanksgiving was grateful hearts acknowledging the favors of God.

Supervisor Ron Gould: Sounds like Ron Gould is just another politician thinking his personal values are something that everyone else needs to follow. Last time I checked, a person still has freedom of choice in America!