Column | What’s up with the Lake Mead striper bite? 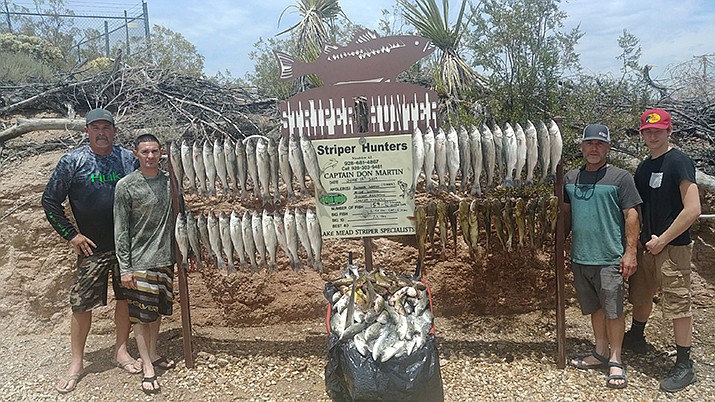 The question on my mind this week is what is going on with the striper fishery at Lake Mead?

As you know, I operate a fishing guide service on Lake Mead where my anglers fish for stripers and to a lesser degree, channel catfish.

I only fish at night due to sizzling hot daytime temperatures, and the fact that normally from April through August we catch fish, a lot of fish.

But this year it has been strange. Spring seemed to hang around for a lot longer, and the monsoon season has been later.

And the fishing has been, well, weird.

In May the fishing started to pick up and in June and until about mid-July it was excellent. Our trips averaged over 136 fish a night.

Then in mid-July with the advent of the monsoon season, our trip average dropped to 100 fish per night.

Finally when August arrived, the trips suddenly went to an average of 50 fish per night. And in my business and opinion, that is horrible.

So what is happening to cause these changes? I felt it was the monsoons and the drop in barometric pressure. I tried to blame it on the full moon cycle, but where I normally fish is kind of hidden from the moon, so that doesn’t appear to be the case.

It is perplexing to say the least.

I have asked Matt Chmiel, the head fishery guy at the Region III office, for his thoughts.

I have asked numerous other anglers, including the guys in the Nevada Striper Club, which is out of Las Vegas. Now those guys and gals fish the other end of Lake Mead, so I was curious as to what they had to say.

One angler said that due to the warming of the lake water by August the stripers move to much deeper water where it is cooler and maybe better oxygenated. Hmm. Sounds reasonable.

Another angler said he thought my anglers had just caught too many fish in the area that I fish. He thought I had “fished out the area.” I don’t think so. In the summer of 2017 we caught over 5,000 fish in this area and the bite was good right up until I quit fishing in August. There is an estimate by fishery biologists by Arizona and Nevada that there are 2-7 million stripers in that lake.

I have been told a number of times that when it comes to stripers, the rule on Lake Mead is to catch and keep as many as you want to eat that are under 20 inches long. There is a daily limit of 20 stripers per day of fish over 20 inches long, but in all of the years I have been fishing at Lake Mead, I have never seen anyone in my boat catch that many of the larger fish.

Another theory has to do with when a lake “turns over.” That occurs when the top of the water column is warmed by the sun. It then sinks to the lower levels of the lake, pushing the colder water to the surface. This usually happens in the fall, when air temperatures start to drop.

The air temperatures at night on Lake Mead have started dropping in August, but it is still very warm.

Bottom line is this. No one can really say what the reason is. Chmiel thinks it might be related to the different barometric pressure theory and I agree with that.

One thing is for sure, something is adversely affecting the striper fishing at Lake Mead.

It seems the trips of catching 100-plus fish at night are over, at least for this year.

Fishing is a lot of fun, with some good times to be shared by those in a boat. But I think we might all agree that it is more fun when we have hungry fish tugging on our lines.