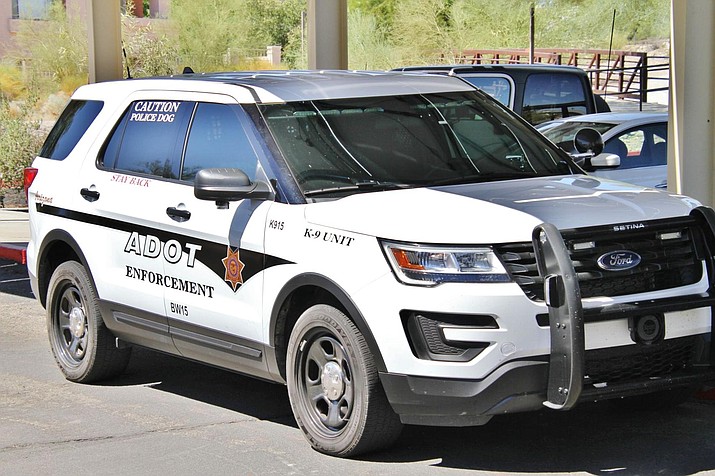 Officers from the Arizona Department of Transportation canine unit underwent training in Lake Havasu of Thursday.(Photo by Brandon Messick/Today’s News-Herald)

Arizona Department of Transportation K-9 officers from throughout the state gathered at the Topock point of entry on Interstate 40 this weekend. They stopped in Lake Havasu City Thursday to prepare for the operation.

According to ADOT Sgt. Jon Olney, the city offered the use of facilities at the Lake Havasu City Aquatic Center to train the transportation department’s drug-sniffing dogs for the weekend ahead, out from beneath Havasu’s triple-digit summer heat.

Participating in the operation were five teams of ADOT K-9 officers from throughout Arizona, including officers from the agency’s Havasu, Kingman, Yuma, Sanders and San Simon offices.

“The dogs are trained in finding marijuana, methamphetamine, heroin and cocaine,” Olney said. “Officers will also be looking for impaired and out-of-service drivers, from minor offenders to organizations shipping across the country. The station will be equipped with these dogs to handle drug investigations when they arise.”

According to Olney, the Topock point of entry is only one stop in the group’s rotation, which takes them to checkpoints throughout Arizona each year.

ADOT officer seize over 1,100 pounds of marijuana in fake delivery van
MCSO deputy/K-9 teams keep Mohave County safe
$29,000 found in cooler, seized by ADOT
I-40 restricted at Topock Port of Entry starting Monday
There are many ways you can help fund the K-9 Foundation and keep crime at bay