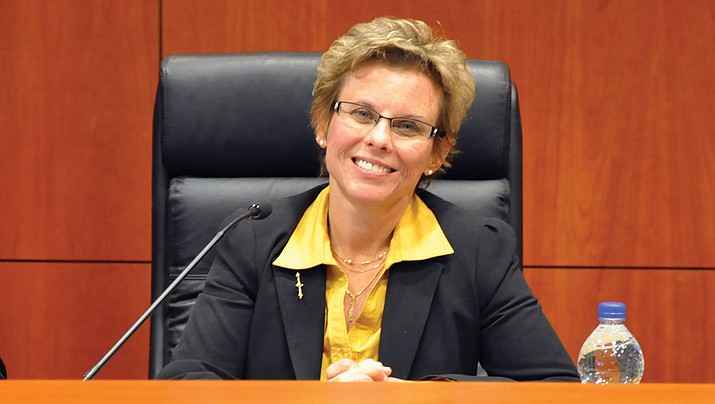 Nearly eight years ago, Mohave County Supervisor Hildy Angius promised her supporters that she would not seek a third term in office. According to her, it’s the only campaign promise she’s ever broken.

Nearing the end of her second term, Angius now serves as chairwoman of the county’s governing board, and represents the area of Bullhead City. Last week, she announced her campaign for re-election in 2020. Were she to abdicate her seat as promised, she says the county would lose the benefit of her near-decade of experience in Mohave County politics.

“I’ve learned a lot,” Angius said. “The things you learn, the things you get done, knowing how to work with people who have knowledge of the system. ... I look back on all of the promises I made when I was first elected, and I’ve kept all of them except this one.”

One of the most valuable lessons Angius has learned has been the value of debate, especially with issues that matter.

“Just voting ‘no’ on something isn’t enough,” Angius said. “If you believe in something you have to fight for it, talk about it in such a way that it gets other people to come over to your side. You have to know how to get things done, and that’s the kind of leader I want to be. With the really important things, don’t compromise on them. We have to run a county – people’s way of life depends on us. It’s very sobering, once you think about it.”

Angius doesn’t expect her decision to be accepted by all of her constituents, however. Although she’s running unopposed as of this week, that could still change within the next year.

“I think people know that I’m doing a good job,” Angius said. “If people don’t understand why I’m running again, they won’t vote for me … I understand. I promised not to raise taxes, I’ve promised to do away with outdated regulations … and we’ve systematically changed Mohave County. We went from a county that was controlled by a manager to an administration run by the board of supervisors. I’ve kept all of those promises.”

According to Angius, Mohave County has developed beyond her expectations since she first joined the county’s governing board.

“The way the county’s opened up to economic development has been unprecedented,” Angius said. “Industries come to us and say they’ve never seen a more open and helpful community. I think we’re going to get a lot of new businesses in the next few years. I think we have a very good administration.”