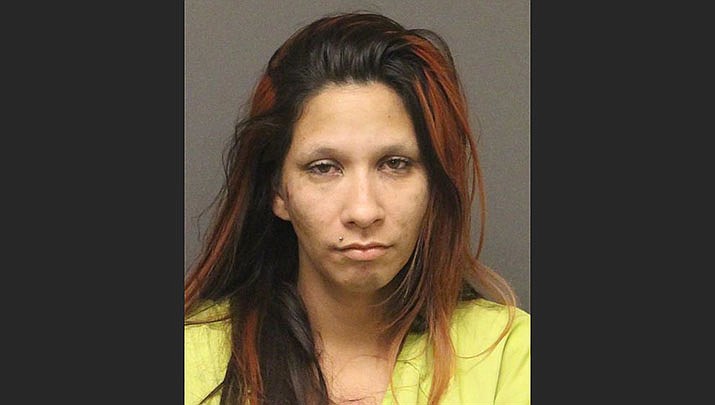 KINGMAN – Krystina Victoria Harris, 28 of Kingman, was arrested on numerous felony charges Monday, Aug. 19 after reportedly assaulted a deputy in fleeing the scene of a traffic stop July 30.

On July 30, deputies conducted a traffic stop on a truck in the area of McVicar Avenue and Ty Street in Kingman. During the stop, the driver was identified as Harris and a passenger in the vehicle was identified and discovered to have a felony warrant. Deputies removed the subject from the vehicle and arrested her for the warrant.

Deputies initiated a pursuit with the vehicle, but eventually lost sight of it. At approximately 5 p.m. Monday, deputies were called to a business in the 4500 block of Stockton Hill Road as an employee had positively identified Harris. Deputies arrived on scene and observed Harris standing by a vehicle and advised her she was under arrest for the previous assault.

Harris attempted to flee on foot and ran away from deputies across the parking lot. Deputies pursued Harris on foot, eventually catching up to her and grabbing her from behind to place her on the ground.

Harris was detained and a search of her purse revealed marijuana, baggies with white crystal residue, a scale, and a piece of tin foil that contained a burnt substance, which tested positive for methamphetamine.

Harris was arrested for the following felony charges: aggravated assault with a deadly instrument, aggravated assault on an officer, unlawful flight from law enforcement, marijuana violation, dangerous drug violation and drug paraphernalia possession. She was booked into the Mohave County Adult Detention Facility without further incident.