Navigating ADA compliance
William Macabe has noted what he sees as numerous ADA violations throughout Kingman, but building officials say it’s not that simple 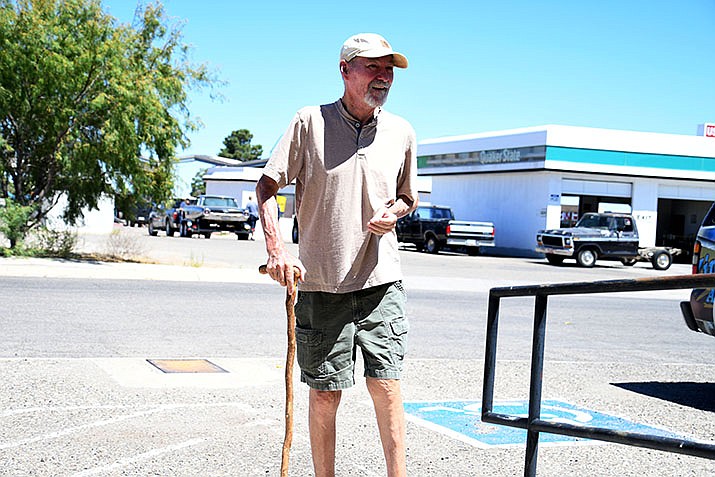 William Macabe says the Americans with Disabilities Act gives disabled persons such as himself a level playing field. However, he has issues with how the City of Kingman handles what he sees as violations. (Photo by Vanessa Espinoza/Daily Miner)

KINGMAN – Golden Valley resident William Macabe says he doesn’t look for Americans with Disabilities Act violations when he comes to Kingman, but in the course of walking around town, believes they’re hard to miss.

“Well, what first got me is getting into some of the buildings, the doors were hard,” he said of the weight it takes to enter some local establishments.

According to https://adata.org/learn-about-ada, interior doors should require no more than 5 pounds of force to open. While there is no requirement for exterior doors, they should open with the minimum force possible. Maximum opening force is from 8.5 to 10 pounds.

Macabe said there are a collection of businesses, primarily along Stockton Hill Road, which have doors that are difficult for disabled persons to open. Some of those doors are interior while others are exterior, and according to Macabe, who spent a career as a building official and is himself disabled, take as much as 15 pounds of force to open.

He said there are numerous places with ramps that aren’t up to snuff for a variety of reasons. One main complaint he has is ramps without railings on both sides. Macabe noted that ramps aren’t only used by disabled persons, but also by the elderly, parents with strollers and even first responders.

According to building officials, the City of Kingman is working toward having a designated employee that will handle reports of ADA violations. (Photo by Vanessa Espinoza/Daily Miner)

He also pointed out what he sees as issues with handicap parking spaces in the area. Macabe said some handicap spaces in Kingman don’t provide enough room for disabled persons to exit their vehicles.

“Where we really come into play is on new buildings or major alterations to a building, major remodels and that kind of thing, where new ADA requirements are required,” Eaton said. “On new construction, major alterations, we are requiring full compliance with ADA. You won’t find a new building out there that’s not, I guarantee you that,” he later added.

And while Eaton said everyone should have access to everything and be treated equally, compliance is different when talking about existing buildings according to Young.

“There are really no retroactive ADA requirements for existing buildings,” Young said. “Unless there’s what we call a code-triggering event (such as a renovation), we wouldn’t review an existing building’s ADA status.”

And even then there are various thresholds of ADA compliance depending on the scope of work.

“I don’t know if it’s manpower or what, but they’re not enforcing the codes,” Macabe said, later adding, “I feel they’re not doing the job that they’re hired to do. If a building inspector is there to enforce the building codes, you have all the codes, you don’t pick and choose and that’s what they’re doing. They’re picking and choosing what codes they want to enforce.”

Eaton and Young said that’s not the case, and that the City does what it can within the confines of the law.

Another complaint the City received from Macabe was that it does not have a designated employee to handle ADA violation complaints.

Stairs can be difficult to navigate for some people with disabilities, which is one reason why William Macabe is calling attention to what he believes are ADA noncompliance issues with a number of ramps and stairs throughout Kingman. (Photo by Vanessa Espinoza/Daily Miner)

“Speaking with the City Attorney’s Office, the city attorney is currently working with human resources on that to implement efforts to better serve customers,” Young explained. “That being said, it should be noted that section of law only applies to buildings owned by the public entity, and not private buildings.”

Macabe wonders why the City doesn’t handle ADA violations in a manner to similar to how it addresses weed abatement.

“They’re worried about weed abatement,” Macabe said. “Why don’t they do the same thing when somebody is not up to code? You send them a letter, ask them to comply.”

Eaton said the Building Department will take complaints on ADA issues. However, he said the first step for people with a complaint is to talk to the establishment’s owner.

Should talking to the owner not result in the sought-after changes, then Eaton said a complaint can be made with the department. But formal complaints are actually handled by the Department of Justice.

“For the most part we try to help and assist with that person or business owner to be able to go in and get everything fixed first,” Eaton said.

But Macabe contends that ADA requirements give disabled persons like himself and others a level playing field, and that more action can and should be taken by the City of Kingman.