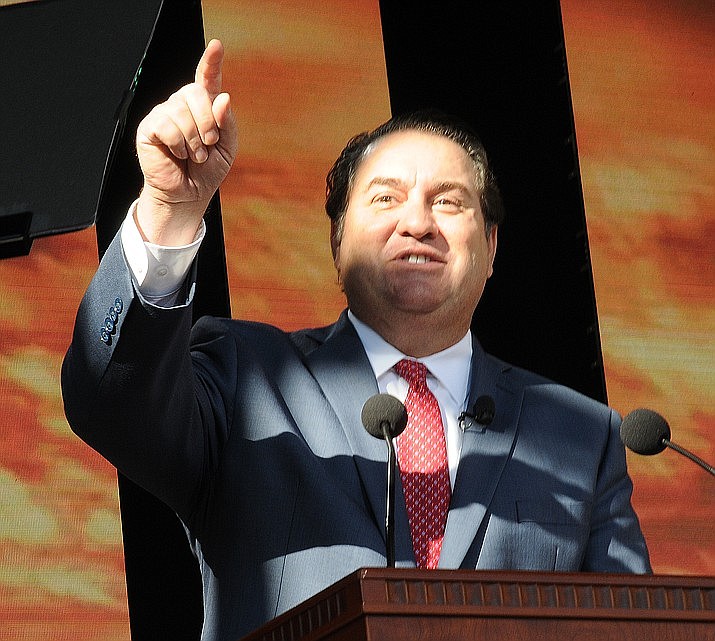 Arizona Attorney General Mark Brnovich, shown above, is working with 51 of his peers and a dozen phone companies to combat illegal robocalls. (Photo by Howard Fischer/Capitol Media Services)

PHOENIX – Arizona Attorney General Mark Brnovich today announced that as a result of a bipartisan, public/private coalition of 51 attorneys general and 12 phone companies, the phone companies have agreed to adopt eight principles to fight illegal robocalls.

This agreement will help protect phone users from illegal robocalls and make it easier for attorneys general to investigate and prosecute bad actors, according to a news release from Brnovich’s office.

The Arizona Attorney General’s Office serves on the executive committee of a bipartisan coalition of 42 state attorneys general that assisted in drafting these principles.

The principles do not set a deadline for implementation, but the attorneys general expect that the companies will implement the principles as soon as is practical.

“These principles are being adopted to help us stop illegal robocalls from reaching our phones,” said Attorney General Mark Brnovich. “I applaud industry for working with attorneys general and for making available free call-blocking tools and committing to share information with my office so we can continue to bring bad actors to justice.”

– implementing call-blocking technology at the network level at no cost to customers.

– implementing technology to authenticate that calls are coming from a valid source.

– monitoring their networks for robocall traffic.

– knowing who their customers are so bad actors can be identified and investigated.

– working with law enforcement, including state attorneys general, to trace the origins of illegal robocalls.

– requiring telephone companies with which they contract to cooperate in traceback identification.

Going forward, phone companies will stay in close communication with the coalition of attorneys general to continue to optimize robocall protections as technology and scammer techniques change.

“The principles offer a comprehensive set of best practices that recognizes that no single action or technology is sufficient to curb the scourge of illegal and unwanted robocalls,” said Levi Professor of Computer Science and Electrical Engineering at Columbia University Henning Schulzrinne.

“I hope that all parts of the telecommunication industry, both large and small, will commit to rapidly implementing these principles and work with state and federal authorities to make people want to answer their phone again without fear of being defrauded or annoyed,” Schulzrinne continued.

If you believe you have been the victim of consumer fraud or illegal robocalls, you can file a consumer complaint by visiting the Attorney General’s website, the news release noted.