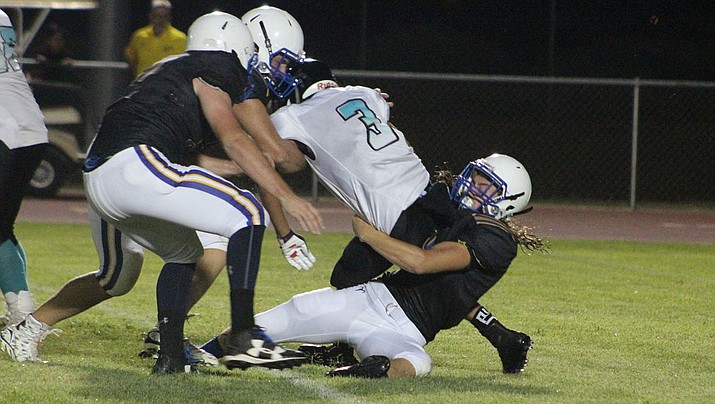 KINGMAN – It’s no secret the Kingman High School football team easily took care of business in last season’s opener against Pinon. A lot of that had to with Austin Dias as he accounted for seven touchdowns in a 58-14 rout.

Dias is back again in 2019 and first-year head coach Russ Stryker expects the Bulldogs to find similar success when the teams meet at 7 p.m. Friday.

“We’re going to be very, very difficult for them to deal with,” Stryker said. “We’re taking a lot of kids. And the offense works – it’s a stout offense and I’m excited about it. I think it’ll give Pinon a lot of problems.”

The Bulldogs proved that in their scrimmage as Stryker said the offense averaged 10.8 yards per rush.

“The first play of the game was 60 yards – the scrimmage went well,” Stryker said.

However, only time will tell how Kingman carries over the success to a game that counts, especially after a 274-mile trek to Pinon. With that fact aside, Stryker feels confident the Bulldogs will be prepared to go once they get off the bus.

“The first week is always interesting, but we’re right there,” he said. “The kids have a good understanding of the offense. We’ve been working on it non-stop since March. So they have a really good idea how to run it.”

And Stryker has done his homework on the Eagles and knows they lean on the I-formation and spread offenses. But Kingman is focused on its plan of attack and what to avoid doing to pick up a victory.

“We need to keep our turnovers down,” Stryker said. “We were fortunate the other night at the scrimmage to only have one. Just one bad snap out of 60 plays. Again, I think we’ll be OK.”

One person who may not be OK until game time is Stryker. There may be some first-game jitters, but he’ll deal with them before kickoff.

“I always get nervous the day of the game,” Stryker said. “The five-hour drive will give me plenty of time to think about that. I’m not too worried. I think we’re prepared and that’s the biggest thing.”