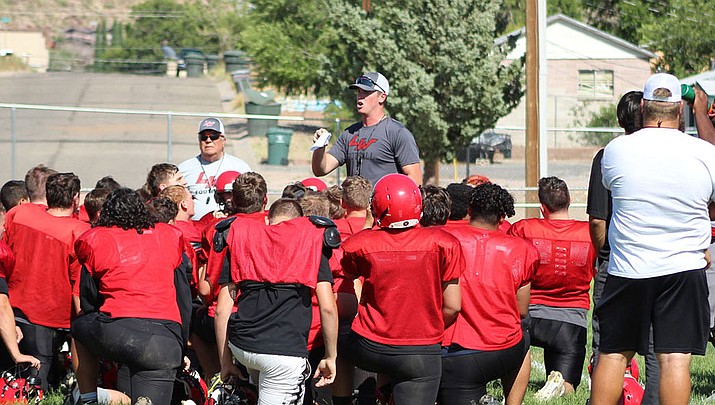 KINGMAN – Patrick O’Boyle wouldn’t say he’s nervous about his first game as Lee Williams High School football coach, but he did admit there’s a combination of being anxious and excited to get started.

The Vols kick off the 2019 season on the road at 7 p.m. Friday against Lake Havasu and O’Boyle is leaning on his family’s experience to help him in his new role.

“I have been lucky growing up around a football family with my dad being a high school football head coach for 30 years as well as having uncles that have coached in the high school and college ranks,” O’Boyle said. “Being able to watch the way that they handle things and go about situations in games and or running a program has helped me immensely in preparing for being a head coach.”

But he was also quick to give a few others recognition because a team can’t be run by just one person.

“Also, I have to give a ton of credit to my coaching staff,” O’Boyle said. “They do a phenomenal job of coming to practice every day with a positive attitude, lots of energy, and the willingness to be a part of a team. Lastly, the players have done a great job preparing for this season dating back to the start of winter workouts, through spring football and summer workouts. They have made it extremely fun to be around them and we as an entire team are looking forward to this season.”

With all of that aside, Friday night is when the rubber meets the road.

The Vols dropped their opener last season in a 34-14 setback to the Knights, but they’re focused on changing that result in 2019.

“We are comparing similarities and preparing for different formations and alignments to our possible schemes,” O’Boyle said. “Every team will be a little bit different from the previous season because of personnel changes, but we are expecting a very tough and competitive football game Friday night. Lake Havasu is well-coached and we are looking forward to the task at hand.”

And when it comes to a few keys to the game, O’Boyle kept it simple.

“I would say that as long as we can eliminate mental mistakes, play hard and stay disciplined within our assignments and alignments then we will give ourselves a great opportunity to succeed and ultimately win the game,” he said.