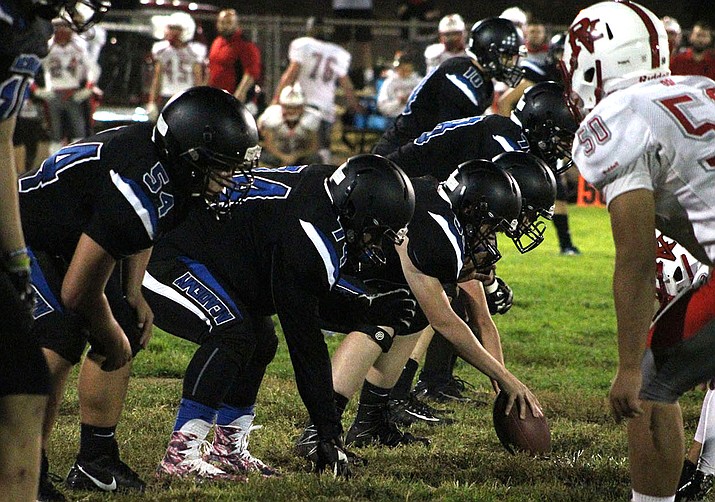 The Tigers will depend on their offensive line to provide pass protection Friday night as they open the 2019 season on the road against St. Johns. (Daily Miner file photo)

KINGMAN – John Morgando is entering just his second season at the helm of the Kingman Academy High School football team, but that won’t stop him from setting high expectations.

That is especially true because the Tigers open the 2019 campaign a week earlier than last year and Morgando knows more time is always helpful to prepare for the first game.

“I don’t think you’re ever as far along as you want to be,” he said. “As a coach you kind of want to see it as perfect as possible and when you don’t see it, you get a little dissatisfied. You got to be that way. You want to strive for perfection – you’re never going to obtain it, but that’s the goal.”

Academy gets the opportunity to live up to Morgando’s words at 7 p.m. Friday when the Tigers make the 292-mile road trip to battle St. Johns.

The two teams have never met before, but it is worth noting that Redskins head coach Mike Morgan is 10 victories away from holding the record for most wins by a coach in Arizona high school football history.

Morgando should know because he’s watched film and a few games from last year that are on YouTube. And from what he’s seen, the Tigers have a shot.

“Our skill positions match up really well,” Morgando said. “As far as the line, we have some big kids. It’s having our big kids maximize their potential in that game and in that moment.”

It won’t be easy though. St. Johns went 7-3 last season and advanced to the semifinals of the 2A State Championship.

“They’re always a top-10 2A team,” Morgando said. “It’s a really important game to me as a coach to kind of measure what we do against a school of similar student population.”

And in order for the Tigers to find success, they’ll need their offensive line to do their job.

However, Academy might be missing a few important playmakers Friday night. There is a silver lining though as the Tigers have a bye week next Friday, Aug. 30.

“We’re just a little banged up – we have some varsity guys that are just now coming back and we have a couple that are close, but probably realistically not coming back this week,” Morgando said. “We’re just going to hold them back and that gives them a solid two to almost three weeks span where they’ve been resting up. So they should be healthy when we play Parker (Friday, Sept. 6) in a big game. That’s another game I like to win.”