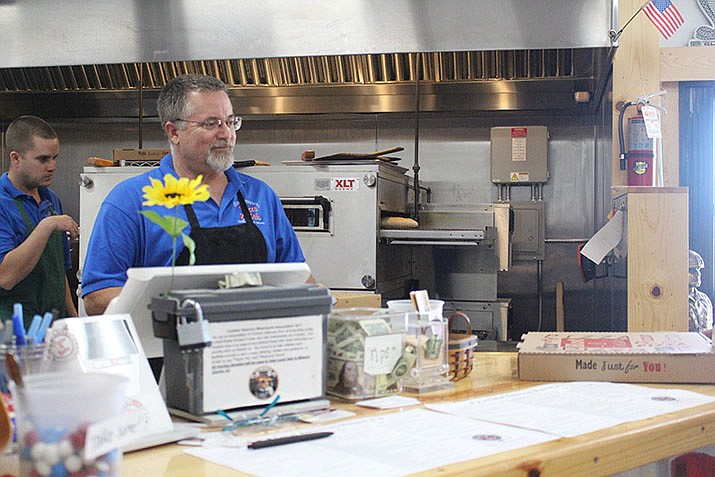 Owner Robert Hall, front, and his son Ethan, work in the kitchen at Great American Pizza and Subs in Golden Valley on Sunday, Aug. 18. (Photo by Agata Popeda/The Daily Miner)

Most businesses do whatever they can to stay politically neutral. Great American Pizza and Subs in Golden Valley is an exception to that rule.

The pizza is American-style on a thick crust with fresh ingredients. The menu is full of references to American politics of the past (William Jefferson Meathead pizza) and present (#MAGA subs), which some find charming and others find infuriating.

“I LOVE HOW PATRIOTIC THIS PLACE IS!” writes Char L. from San Bernardino, California in a Yelp review. “Being a military brat and my son also in the Air Force makes me proud to be an American, so when u step in here ... all you feel is ‘God Bless America’!”

“I would not want to go to any retail or food establishment that displays strong political beliefs in either direction,” said a Kingman resident on a condition of anonymity. “It’s not a ‘patriot’ issue, it’s a political affiliation issue.”

In fact, it’s a little of both.

Owner Robert Hall and his family opened Great American Pizza over a year ago, for Memorial Day. The date was not a coincidence.

Hall is extremely patriotic and his politics and religion are expressed through the décor, both inside and outside of the restaurant. The big “God Bless America” sign above the door is only a beginning. Inside, the walls are covered with posters, pictures and memorabilia which praise American military history and veterans, as well as the Second Amendment. If local rule offends you, one of the signs says, here’s the door.

The restaurant became known for its support of the local Republican Party, and at one point had a Trump stand out front, where customers could buy #MAGA hats.

While some locals see the menu and décor as divisive, international tourists who stop by while en route to Route 66 don’t seem to mind. The atmosphere is friendly, and business is brisk.

Hall, 53 and “kind of retired,” said opening Great American Pizza and Subs four days a week is more of a family hobby than a serious business venture.

“The food comes Monday,” Hall explains. “By Wednesday, we put the radio on and start cooking. We start the dough, we do meatballs by hand. All my wife’s recipes.”

His wife Kathleen, tall and quiet, helps a customer as Hall takes a break on a Sunday afternoon to talk to The Daily Miner. His 14-year-old daughter Gabriella, and son Ethan, 28, are busy in the kitchen. They have four sons and three daughters.

When asked if working on Sunday is against his religious beliefs, Hall, a conservative California transplant, said he considers it a service to the community and a pleasurable way to spend time with family members.

“We try to keep it fun,” Hall said. “It’s something to do together as a family. An icing on the cake. But it proved to be a good investment, too.” 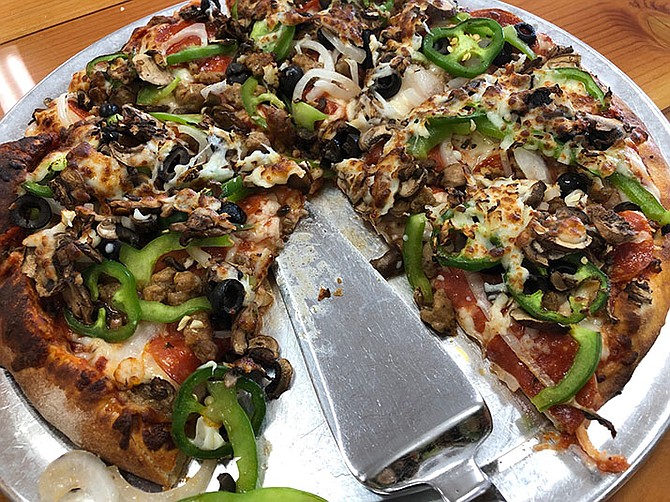