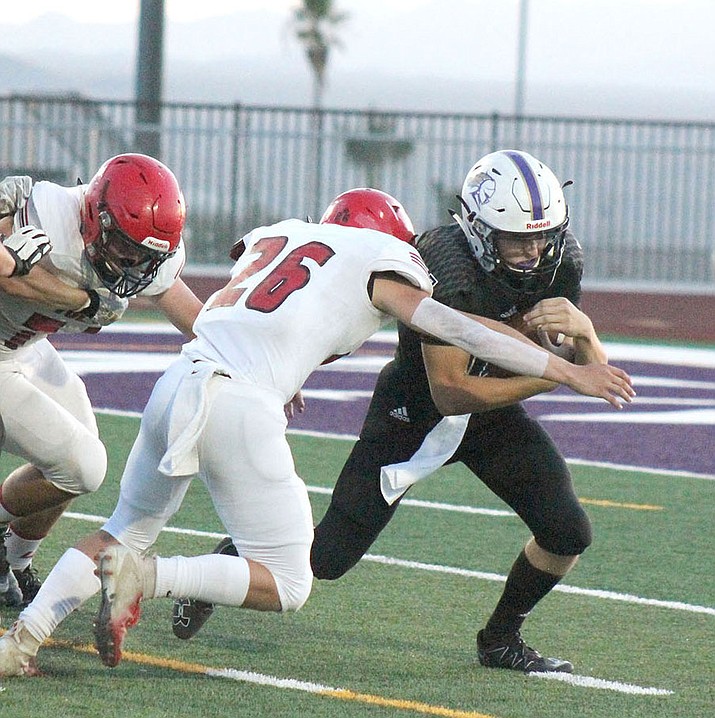 LAKE HAVASU CITY – A game where the first team to score wins turned out to be just that as the Lee Williams High School football team blanked Lake Havasu 6-0 in a defensive battle Friday night at Lee Barnes Stadium.

“We knew it was going to be a knockdown, drag out fight all the way to the end and fortunately we were able to make a couple plays near the end to come out with a victory,” said Lee Williams head coach Patrick O’Boyle.

The game remained scoreless until Vols quarterback Levi Beckham broke the ice with a 12-yard touchdown run with 8:05 left in the game. Lee Williams missed the extra point.

Following the score, Lake Havasu senior Jayden Azar’s long return set the Knights up near their own 45. A pair of catches by Jace Taylor and Cody Pellaton put Lake Havasu in position to answer back.

However, with the Knights going for it on fourth down, Knights quarterback Cole Fuller overthrew Taylor in the end zone to turn it over on downs.

Lee Williams leaned on Wesley Boyd to run out the clock, but the Vols were forced to punt back to Lake Havasu with 46 seconds remaining.

The Knights converted two first downs to move near midfield but their drive was stopped when Fuller was sacked to run out the clock.

“We came out defensively and played a pretty stout game – it just wasn’t enough to get us the win,” said Knights head coach Karl Thompson. “We had some opportunities, but we just didn’t execute.”

Fuller, starting his first varsity game, faced pressure from Lee Williams’ defensive line all night, but was able to hang in the pocket and deliver some timely throws for the Knights.

“Cole is going to have a lot on his shoulders this year and he did a great job stepping in and doing what he needed to,” Thompson said. “He took a couple shots but he spread the ball around. There’s room to improve.”

After Lake Havasu went three-and-out on its first three drives of the night to set up Lee Williams with a short field, the Knights defense stood its ground and kept the Vols off the scoreboard, forcing a fumble twice.

Early in the second quarter, Fuller connected with Taylor on a long completion down the sideline to set Lake Havasu up inside the Lee Williams’ 10-yard line.

However, the Knights’ offense stalled and could not convert a fourth down, giving the ball back to Lee Williams, after Thompson opted to keep the offense on the field.

“Our guy who kicks our field goals and PATs just became our kicker this week and I didn’t want to put him in that situation right away,” Thompson said. “I considered it, but he had never kicked before in a varsity game.”

The Vols were driving late in the first half and a long run by Boyd set them up at the Havasu 10-yard line. But senior Brace Spencer’s interception just before halftime kept Lee Williams at bay.