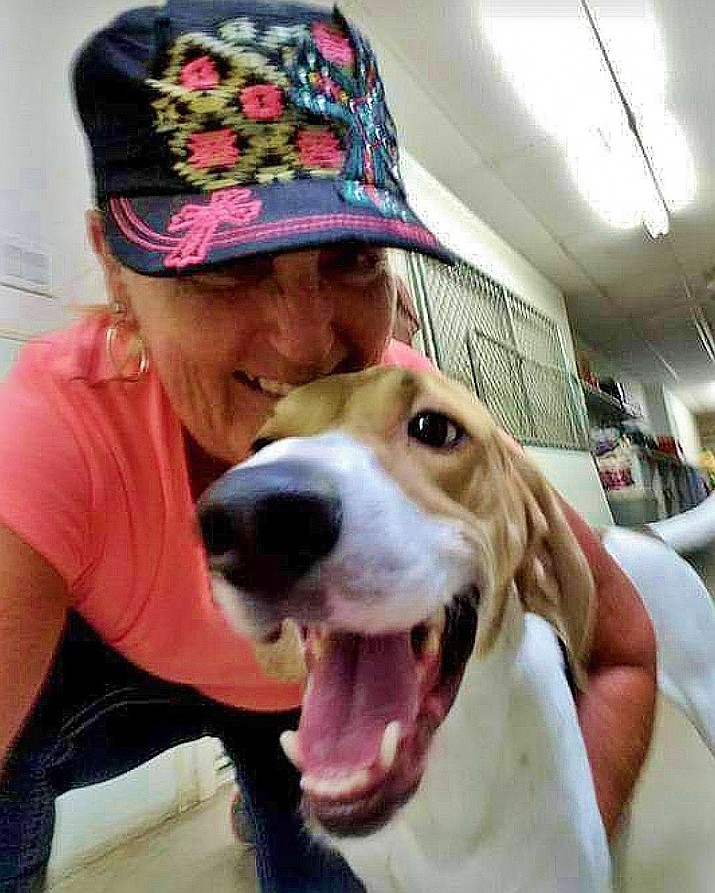 Hundreds of pets are swallowed up by the vast desert landscape every year. Few survive the weeks, months or even years exposed to the elements, surviving is all they do. And one Lake Havasu City woman has made it her mission to bring them home.

Jennifer Agne has spent the past 18 months trapping escaped animals throughout Mohave County. The owner of Havasu’s Happy Tails Dog Boarding, she owns 13 dogs and seven horses of her own. Between her business, her pets, her family and her work with Mohave County Humane Animal Trapping, Mohave County’s lost animals receive the majority of her attention. While she’s rescued only about five or six dogs in Lake Havasu City since 2017, she says the problem can be much larger elsewhere in the county.

“The areas around Kingman and Dolan Springs are like a dumping ground,” Agne said. “Whenever someone wants to get rid of an animal, they just take them and dump them out in the desert. They go into ‘survival mode’ out there.”

Agne says not all of the animals she catches are abandoned, however. Agne is a professional trapper, and has devoted as much time as six months to finding and capturing lost animals and reuniting them with their families. Beneath the desert sun, enduring harsh conditions and occasional storms, those animals fend for themselves, often going hungry or relying on scraps foraged from populated areas.

It was one such case that launched Agnes’ efforts, she said, with reported sightings of a dog seen at locations throughout the county.

“Nobody knew where he came from,” Agne said. “He would let people toss food to him, but he would never come close. Eventually, someone started a Facebook page about him. He was sighted in Mohave Valley, then at the Pilot station (at the junction of Interstate 40 and State Route 95). He was there a few weeks, then he would just disappear. Then he was seen in Needles, and Kingman … he was following the railroad tracks.”

Agne set about capturing the animal, which she later named “Gus,” in 2017. It was an effort that took her from Kingman to Lake Havasu City and comprised a search of 300 miles over 10 months. It was a slow process, as Agne and her team set food out in areas where Gus was known to frequent, and watched from a distance. Within days, Gus became comfortable enough to approach the food – and unsuspecting of the trap Agne would lay for him.

With the right bait and an assortment of specialized traps, Agne was able to capture Gus, as well as other animals lost in the Mohave County desert, and return them to the lives they once knew as pets.

“Once you start doing it, you begin to form a bond with these dogs,” Agne said. “It can be stressful, and heartwrenching … but it can also be rewarding.”

Agne is often willing to take on trapping and recovering pets in lieu of animal control services. While animal control officers’ time and resources may be limited, she is able to devote as much time as she needs to an operation.

The most recent of Agne’s rescues was a border collie seen in the area of Kingman Municipal Airport, who Agne’s Facebook followers had named, “Spirit.”

“It took six weeks,” Agne said. “The problem was that because the dog was so close to the Kingman airport, people would throw food to it … it wasn’t hungry enough to come to our food station afterward. No one wants to see this dog starve, and they’re nice people. We had to go to businesses throughout the area and tell them, we have food set out for this animal, and it’s being monitored every day. It’s not going to starve.”

According to Agne, she was eventually able to lure the collie in with daily offerings of food. The dog, which has since been renamed, was wary of anything even resembling a cage, Agne said. Because of the dog’s caution, Agne used a trap known as a Collarum – a spring-loaded device activated by a pressure plate, which would launch a snare around the animal’s neck once the trap was set.

“We stood about 20 yards away, behind our car,” Agne said. “When they’re caught, it’s a complete surprise … they struggle. We came up and threw a net over her. Almost as soon as that happens, most animals submit.”

Agne works closely with animal fostering groups in Kingman and Bullhead City. The first thing she does with any rescued animal, she says, is scan it for a microchip. More than once, according to Agne, an animal’s rightful owners could be contacted if a microchip was in place.

“I have a love for dogs,” Agne said. “I go by my own kennels every night, and tell the dogs goodnight, and that I love them … I think about these dogs that are loose or abandoned, fending for themselves, and I feel for them. They’re innocent. You can imagine being a dog in a monsoon storm, or in the heat, or hearing a pack of coyotes – they have nobody.”

Agne eventually hopes to expand her operation under a nonprofit organization.

“It’s a big dream of mine, and it’s close to happening,” Agne said. “I’d like to open a rescue organization for these desert dogs. I could trap a lot more dogs if there were more places we could go to. There are hundreds of dogs out there. We have it good in Havasu – there aren’t as many lost and abandoned dogs here.”