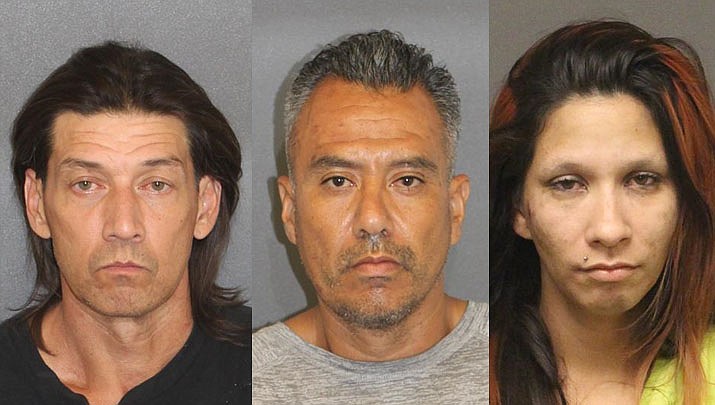 Krystina Victoria Harris, 28 of Kingman, was arrested on numerous felony charges Monday, Aug. 19 after allegedly assaulting a deputy in fleeing the scene of a traffic stop July 30.

On July 30, deputies conducted a traffic stop on a truck in the area of McVicar Avenue and Ty Street in Kingman. During the stop, the driver was identified as Harris and a passenger in the vehicle was identified and discovered to have a felony warrant. Deputies removed the subject from the vehicle and arrested her for the warrant.

Deputies initiated a pursuit with the vehicle, but eventually lost sight of it. At approximately 5 p.m. Monday, deputies were called to a business in the 4500 block of Stockton Hill Road as an employee had positively identified Harris. Deputies arrived on scene and observed Harris standing by a vehicle and advised her she was under arrest for the previous assault.

Harris attempted to flee on foot and ran away from deputies across the parking lot. Deputies pursued Harris on foot, eventually catching up to her and grabbing her from behind to place her on the ground.

Harris was detained and a search of her purse revealed marijuana, baggies with white crystal residue, a scale, and a piece of tin foil that contained a burnt substance, which tested positive for methamphetamine.

Harris was arrested for the following felony charges: aggravated assault with a deadly instrument, aggravated assault on an officer, unlawful flight from law enforcement, marijuana violation, dangerous drug violation and drug paraphernalia possession. She was booked into the Mohave County Adult Detention Facility without further incident.

Deputies observed damage to the interior of the residence, and were advised that Shean had caused the damage when he became agitated at one of the victims. The two victims told deputies they locked themselves inside a bedroom when Shean began pounding on the door, eventually breaking it, and entered the room and began assaulting both victims.

One was able to get away and call 911. George Thaveesakda Shean was arrested for felony criminal damage per domestic violence, and misdemeanor charges of assault per domestic violence and disorderly conduct. He was booked into the Mohave County Adult Detention Facility.

At about 5:15 a.m., Mohave County Sheriff’s Office deputies were alerted to a possible stolen vehicle entering into Arizona and began searching for the vehicle.

Deputies observed a gray Chevy Suburban traveling north on Highway 95 in the area of Courtwright Road. A records check revealed it to be the stolen vehicle.

Deputies initiated a high risk traffic stop and the vehicle pulled into a parking lot in the 8500 block of Highway 95. With weapons drawn, deputies ordered the driver and passenger out of the vehicle without incident.

Jessica Dawn Geesey, 23 of Kingman, was riding her bike which reportedly had no working lights along Bank Street Saturday, Aug. 17 when she was stopped by law enforcement.

A traffic stop was conducted at about 10:50 p.m. after law enforcement noticed a female subject riding a bike north on Bank Street without working lights and against traffic.

The subject was identified as Geesey, and a records check revealed she had four active arrest warrants. A pat search revealed about 0.3 grams of heroin in Geesey’s pants pocket.

Jessica Dawn Geesey was arrested for felony narcotic drug possession and the warrants. She was booked into the Mohave County Adult Detention Facility without incident.