Honoring John McCain: Some efforts moving forward, others have stalled 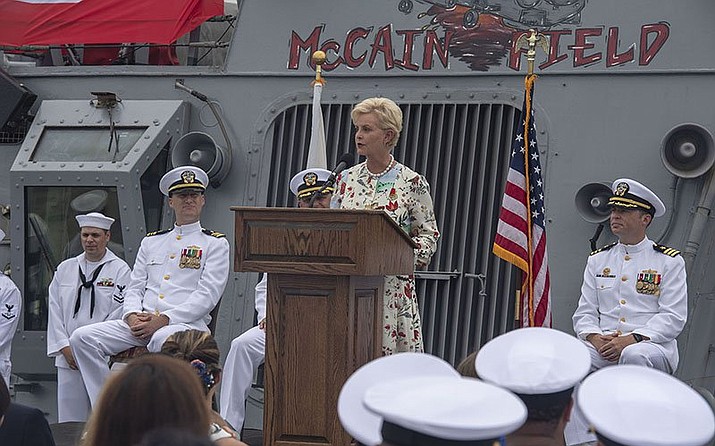 Cindy McCain spoke at the 25th anniversary of the U.S.S. John S. McCain’s commissioning. Many efforts to honor McCain, who died a year ago from brain cancer, are moving forward. (Photo by Petty Officer Second Class William McCann/U.S. Navy)

WASHINGTON – On any given day in the past year, about six people have stopped by the U.S. Naval Academy visitor’s center to ask about John McCain’s gravesite, where they have left everything from flowers to flags to liquor miniatures.

The mementos are just one way the longtime Arizona Republican senator has been remembered in the year since his Aug. 25, 2018, death from brain cancer.

But while former colleagues have added McCain’s name to legislation and one Arizona school district plans to name an elementary school for him, other tributes have stalled. Among those are a measure by Sen. Chris Coons, D-Del., to name a human rights commission for McCain – a bill that was introduced in February, but has yet to get a hearing.

“We think it’s time, it’s been a year,” said an aide to Coons, before conceding that the delay “is typical for creating something new in the Senate.”

It’s not as if McCain has been forgotten. Even before his death, the Senate named the fiscal 2019 Defense budget bill for the former chairman of the Senate Armed Services Committee and lawmakers added his name to the title of a veterans health care bill. Last July the Navy officially included the senator on the USS John S. McCain, which was originally named for his father and grandfather, both admirals in the Navy.

In October, a little more than a month after his death, the Buckeye Elementary School District voted to christen its next elementary school, its eighth, the John S. McCain III Elementary.

And it’s not just at home that he is remembered.

A memorial in Hanoi, Vietnam, was erected in 1985 on the spot where McCain was shot down before being held as a prisoner of war for five years in the notorious “Hanoi Hilton,” the Hoa Lo prison. A library in Dnieper, Ukraine, is set to be named this week for McCain, a staunch opponent of Russian aggression in the region.

But other proposals have struggled.

In the days after McCain’s death, Senate Minority Leader Charles Schumer, D-N.Y., suggested renaming the Russell Senate Office Building for McCain, a proposal quickly backed by senators from both sides of the aisle, including then-Sen. Jeff Flake, R-Arizona.

Senate Majority Leader Mitch McConnell, R-Ky., put the brakes on that plan, announcing instead that he would name a bipartisan committee to explore ways for the Senate to honor McCain. But that panel does not appear to have been appointed, and McConnell’s office did not respond to requests for comment.

One person who has not forgotten is President Donald Trump, who criticized McCain earlier this year in tweets and in a speech in which he blamed the “last in his class” at the Naval Academy senator for “spreading the fake and totally discredited dossier” that sparked the Mueller investigation.

In response, Schumer in March tweeted, “I look forward to soon re-introducing my legislation re-naming the Senate Russell Building after American hero, Senator John McCain.” But no bill has been forthcoming.

Coons still has hope for the resolution, introduced in December with Sen. Thom Tillis, R-N.C., to create the John S. McCain III Human Rights Commission. The measure has 21 co-sponsors, including Arizona Sens. Kyrsten Sinema and Martha McSally, but has stalled.

Coons and Tillis tried unsuccessfully to add the human rights commission language to the Defense budget bill in June, but the Coons staffer said they are still hopeful the bipartisan, “uncontroversial” bill will pass.

McCain’s widow, Cindy, told The Washington Post last week that Arizona State University has expressed interest in housing a library or public service center in her late husband’s name. But in an emailed statement Monday, an ASU spokesperson said that while the university has “deep respect for the late Senator John McCain and are committed to keeping his legacy alive through the McCain Institute and other endeavors…. The great idea of a library has been raised, but discussions are very preliminary at this point.”

The McCain Institute for International Leadership at ASU may be McCain’s most prominent memorial so far. The institute, which works on issues of global leadership, human rights and human trafficking, is marking the anniversary of his death with the #ActsofCivility initiative. The weeklong social campaign encourages individuals to perform acts of civility and reach across divides.

“The mission of the McCain Institute is to extend dignity to all and civility is an important part of that,” said Luke Knittig, the institute’s senior director of communications. Knittig said the institution hopes to make #ActsofCivility an annual event.

At the Naval Academy, where McCain was a midshipman, spokesperson Jennifer Erickson said there are currently no plans to rename anything on campus in McCain’s honor. But the grave –next to McCain’s former classmate and longtime friend, Adm. Chuck Larson – continues to collect mementos on a daily basis.

Those have included a cactus, a book of military fiction, U.S. and international flags, a flying eagle statue and more – all of which are being collected and held by the USNA memorial affairs director, Erickson said.