Ducey, Gallego want Arizonans to be able to fly 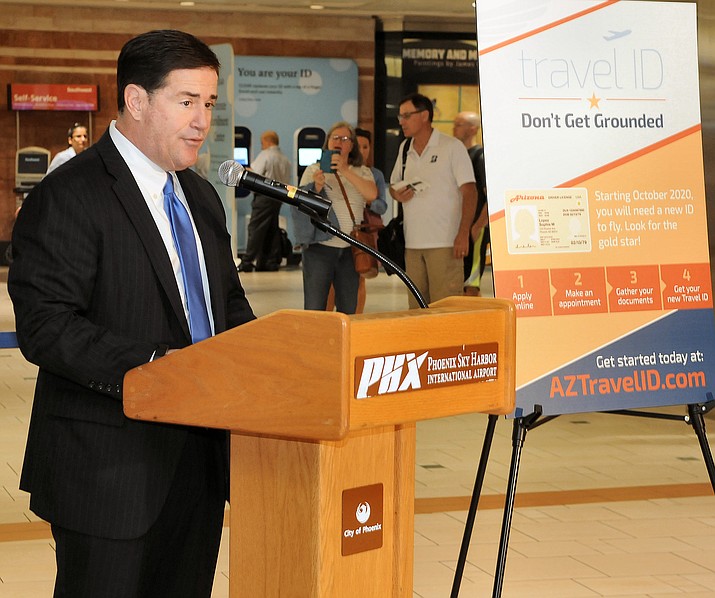 Arizona Gov. Doug Ducey seeks to spread the word during a news conference at Sky Harbor International Airport Thursday about a federal law that takes effect next year that will require Arizonans to have an enhanced driver’s license or state-issued ID to board aircraft. (Photo by Howard Fischer/Capitol Media Services)

PHOENIX – Gov. Doug Ducey says he already has his.

Phoenix Mayor Kate Gallego admits she does not.

What we're talking about is an enhanced Arizona driver's license, one that will allow people to board aircraft after Oct. 1, 2020.

That's the last date that the Transportation Security Agency will accept regular state-issued licenses and IDs to get to the boarding gates at airports. After that, those without the new identification cards, marked with a gold star in the upper right corner, will need a passport or military ID.

And it's not just about being able to fly.

Without identification the government considers acceptable, federal buildings also will be off limits. 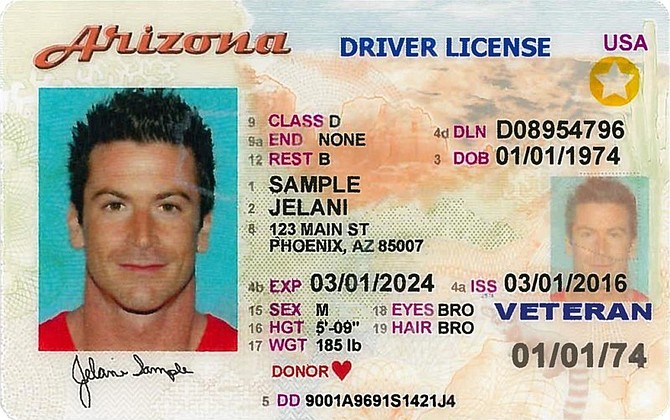 This generic Arizona license shows the gold star in the top right corner, which means it is a new travel ID issued by the state of Arizona that is acceptable for flying and entering federal buildings. (State of Arizona/Courtesy)

The the mayor's admission she had not gotten around to it came Thursday as Ducey and Gallego gathered the media at Sky Harbor International Airport to remind them of the federal law.

They also provided a road map of sorts of what it takes to get the new IDs.

But it's more involved than simply dropping in at the local Motor Vehicle Division office.

The requirement is an outgrowth of the Real ID Act, enacted by Congress and the Bush administration after the attacks on the World Trade Center and Pentagon by terrorists who hijacked aircraft.

That law directed the Department of Homeland Security to come up with requirements for secure documents for everything from getting into certain federal buildings to boarding commercial aircraft.

The agency's answer was to recognize driver's licenses only from states that follow certain procedures, including verifying the documents offered by the applicant to prove identity to ensuring that the license itself cannot be altered.

Arizona has, to say the least, been slow to comply. In fact, state legislators, reacting to concerns about creating a national ID card, specifically voted in 2008 to bar the Department of Transportation from creating a Real ID-compliant license.

It took until 2015 –and threats by Homeland Security to stop honoring Arizona licenses – for lawmakers here to finally come around.

They first became available in March of 2016.

Getting one of the new licenses requires gathering up some documents, starting with a passport or birth certificate. But applicants also need something with a Social Security number as well as two documents with a home address, like utility bills or bank statements, to prove Arizona residency.

That last requirement can be a bit of a problem for those who get all their mail at a post office box and do not have utility bills with the service address.

The next step is to go to an MVD office or one of the third-party license providers. But walking in without an appointment, which can be made online, can lead to sitting around and a lot of waiting.

It's also possible to fill out the forms online ahead of showing up.

Be prepared to pay an extra $25 for the enhanced license.

The other downside, if you will, is these new licenses are good for only eight years. By contrast, once someone gets a regular Arizona license it is good until the 65th birthday, though there is a requirement to get a new photo every 12 years.

And what of Gallego's lack of action to date?

"I have been traveling with my passport,'' she said. And a passport will remain a viable form of identification beyond Oct. 1, 2020.

Ducey, for his part, boasted of already having his new ID.

Actually, that's not entirely accurate: While completing the application can be done in that short a time – especially with an appointment -- it can take up to two weeks to actually get the new enhanced license in the mail.

For the moment, Arizonans have to take the governor's word that he does, in fact, have the new ID, as he declined to pull it out of his wallet to show reporters.

"I do not want you showing up at my house,'' he quipped.

But the truth is, it isn't necessary to check out Ducey's license to get that information: His Paradise Valley street address is on the nomination papers he submitted when he ran for re-election last year.