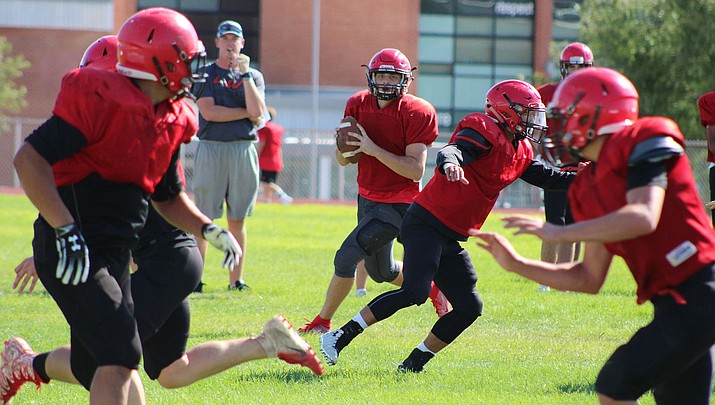 KINGMAN – Levi Beckham knew early in the offseason that he would take on a much bigger role for the Lee Williams High School football team.

With the graduation of Enzo Marino, the Vols needed a new starting quarterback and Beckham stepped into the spotlight.

“The keys were given to me, so I was ready to put in the work,” Beckham said. “It made it a lot easier knowing that I had the spot and I didn’t have to worry about a lot of people coming after it. I’m able to work with the team better and let them know who I am.”

But the starting role didn’t just fall into Beckham’s lap. He spent a lot of time last season watching and learning to get to where he is today.

“Being on the sideline was probably more of a mental season – learning to see how to read coverages better and understanding the game more,” Beckham said. “I did learn a lot from Enzo. He did teach me a lot of things – throwing mechanics, reading a defense and other stuff like that. It worked out really well.”

The hard work and dedication has already paid off as Beckham helped Lee Williams open the season on a high note last week.

Beckham’s 12-yard scamper in the fourth quarter was all the Vols needed in a 6-0 victory at Lake Havasu.

And while Beckham’s touchdown was a special one, the junior signal caller isn’t focused on individual accomplishments.

“I believe that was my first varsity touchdown, but it doesn’t really matter,” Beckham said. “I’m worried about the team more – about us focusing, getting the win.”

The team-first mentality isn’t too surprising though.

Lee Williams head coach Patrick O’Boyle knows Beckham’s play is crucial to the Vols’ success, but he and his staff are preaching teamwork each day in practice.

“It’s a full team thing and we really pride ourselves in being a full team,” O’Boyle said. “It’s never about one person. (Levi has) done a really nice job accepting that role and not trying to do too many things that he’s not supposed to do or just trying to do too much. We’re not going to put a whole lot on his plate, but we do ask him to manage the game. And I think he did a nice job of that and we’re looking forward to what he’s going to do this week, too.”

Beckham and the Vols look to start the season 2-0 when they welcome Buckeye to town Friday for a 7 p.m. contest.

The Hawks also kicked off 2019 with a bang – cruising to a decisive 52-20 win at Amphitheater.

Buckeye’s Angel Macedo was a key part of the victory as the senior quarterback passed for 233 yards and four touchdowns.

While the Vols have their work cut out for them, Beckham knows the squad can come out on top.

“We can handle it,” he said. “If we go in with a strong mental game, we can win if everyone focuses in and everybody does their job. Small things matter.”

Only time will tell how Lee Williams fares, but the Vols do have momentum on their side heading into the home opener against the Hawks.

“Starting out the season with a win helps a lot – it gives the guys the confidence that they can do things like that,” O’Boyle said. “But at the same time, nothing is given to us. So we’ve really preached that ‘Just because we won last week, does not mean we’re going to come out and step on the field and we’ll win this week.’

“We’ve had good, hard practices all week,” O’Boyle continued. “Our standards and expectations don’t lower just because of a win, and these guys know that. They know they’re going to have to come out, bust their butts every single day and give their best in order to be prepared for Friday night.”