Prep Football: Bulldogs will lean on their rushing attack against Sedona 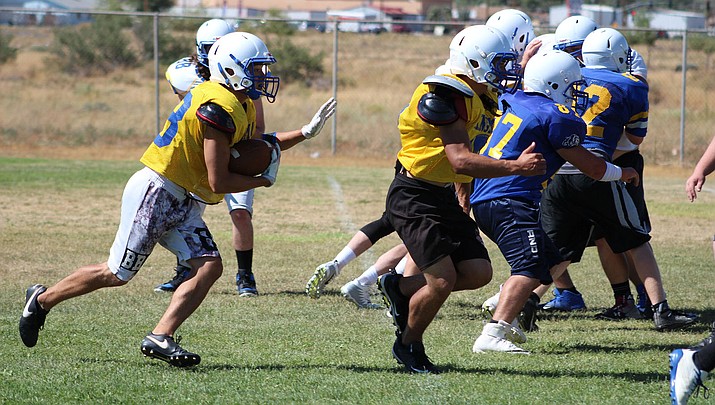 The Bulldogs can start 2-0 for the second consecutive season with a win Friday against Sedona Red Rock. (Photo by Beau Bearden/Daily Miner)

The Kingman High School football team will stick to that motto Friday night after rushing for 292 yards last week in a 58-0 victory at Pinon.

“It’s important for a team to have an identity,” said Bulldogs head coach Russ Stryker. “This is our identity – we are going to run the ball on you. And you can try to stop us, but you probably won’t be able to. It’s probably the first time I’ve ever had, not a one trick pony, but where this is what we’re going to do and you try to stop us. It’s pretty cool. It’s pretty fun.”

Kingman looks to continue the fun at 7 p.m. Friday on the road against Sedona Red Rock. Five different Bulldogs scored at least one touchdown in the rout of Pinon and Stryker expects more of the same Friday night.

“Sedona is really well coached, but I think we’ll overwhelm them,” Stryker said. “We have so much size, speed and numbers. We’ll travel 40-45 guys up there and I think their roster is about 20. So we should be able to overwhelm them with numbers and power.”

And familiarity is the key to Kingman’s rushing attack. The Bulldogs found an offensive scheme that works for them and they’ve continued to run it over and over again.

“We’ve passed 3,000 reps on the single wing this week,” Stryker said. “I’ve heard smarter coaches than me say with the veer or any offense with a wing, you need to rep it at least a thousand times before you ever play a game – and I believe that. We’ve run a scrimmage and played a game and haven’t had a bad snap and only had one fumble. Knock on wood. I think all the reps help.”

However, Kingman knows it is important to have other tools in the shed in case of emergency.

A stout rushing attack can take a team a long way, but Stryker and his staff have also installed a few other plans of attack.

“We have more stuff, but we’re just not showing it yet,” Stryker said. “The longer we can go without having to show it, the better off. It’s just our running game is so hard to stop. A lot of good things happen when you run the ball.”

That was on display last week as Austin Dias rushed for three scores, while Gavin Randall added 102 yards and a touchdown.

Worth noting, however, is the Bulldogs attempted just one pass in the victory.

That could change against the Scorpions.