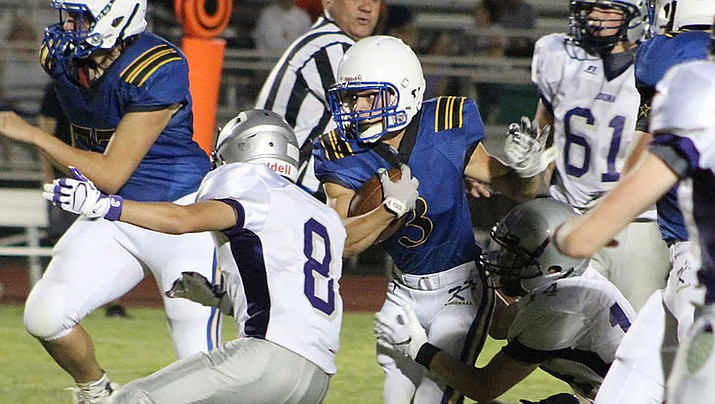 KINGMAN – Russ Stryker and his coaching staff knew one thing entering this season – the offense was going to be good. The Kingman High School football team proved that Friday night by rushing for 402 yards and eight touchdowns in a 66-8 rout of Sedona Red Rock.

Even more impressive is the fact the Bulldogs found the same success on defense – recovering four fumbles and tallying three interceptions.

“We knew we’d be able to run on anybody, but we wanted to make sure our defense was going to be strong as well,” said Bulldogs head coach Russ Stryker. “If your identity is being a ‘smash-mouth football team,’ then you have to be that on both sides of the football. So that’s something that the coaching staff has done a really great job at.”

Stryker spent most of the offseason working on the offense, while the other coaches collectively worked on helping him with the defense.

The game plan paid off big time as the defense notched 37 solo tackles and six sacks in the convincing win.

Austin Dias led the way with seven tackles and one sack, while Dominic Concepcion, Rider Havatone and Gavin Randall each tallied an interception.

Randall carried over his success to the offensive side of the ball with 181 yards rushing and three touchdowns.

“Gavin had a really good game,” Stryker said. “He pretty much spaced it out over three quarters. We had primarily our 2s in the whole second half, but he ran the ball some in the third quarter.”

Dias was also instrumental with 130 yards rushing and two scores, while Joey Drumright added two touchdowns. Malakai Bell and Richard Garcia rounded out the top performers with a score apiece.

“Sedona was really focusing in the first quarter on us not getting around the end,” Stryker said. “So we just ran the ball up the gut a bunch. I think we had 264 yards rushing in the first half. Sedona was tired, they were wore out, so we were able to get around the edge as much as we wanted after that.”

The Bulldogs (2-0) are idle this week before playing their home opener Friday, Sept. 13 against another 2-0 team – Santa Cruz Valley.

“This week we’re going to get after it,” Stryker said. “We’re going to do a whole of conditioning, a whole lot of technique stuff and really focus on preparing for Santa Cruz Valley,”